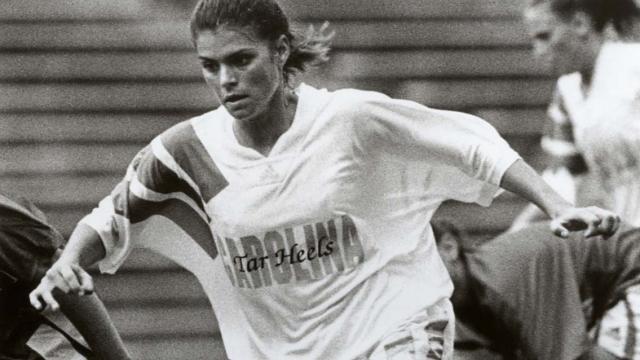 
Mia Hamm became a soccer icon at North Carolina. A four-time champion, record-shattering icon that helped the Tar Heels cement their status as a college soccer dynasty. But before she stepped on a field at UNC, she was already changing the game.

Most teens spend their afternoons consumed by homework or an extra curricular activity. Hamm fulfilled her duties in the classroom, but never before had a 15-year-old debuted for the United States Women’s National Team.

Hamm was a trailblazer, the youngest to ever play for her country. Appearing on the national stage was like a tremor, a precursor to something more groundbreaking. When Hamm arrived at North Carolina, her time in Chapel Hill seemed like one shockwave after another.

Here’s everything you need to know about Mia Hamm’s playing career at North Carolina.

Hamm averaged 3.02 points per game in college, equating to a goal and an assist every time she stepped on the field. She never finished lower than second on North Carolina in scoring. During her final three seasons, Hamm led both the Tar Heels and the NCAA in points each time. Her highest scoring output came in 1992, when she registered 97 points in 25 games, an NCAA record.

Losses were a premium at North Carolina between 1989 and 1993. UNC compiled a 92-1-2 record with Hamm on the pitch, winning four national championships as the Tar Heels posted two perfect seasons (1992, 1993) and another without a loss (1989). Following a single loss and the second of two draws, North Carolina and Hamm would win 56 consecutive games to conclude her career.

In four years, Hamm had six-point games in 13 matches, scored nine hat tricks and a trio of three-assist performances. Filling the scoresheet wasn’t uncommon for Hamm, but it does make things more difficult when selecting her best college games.

However, some of her best moments also came on the biggest stage. Here are some of Mia Hamm’s best college games:

North Carolina twice trailed NC State in the quarterfinals of the 1990 NCAA tournament. Forward Kristine Lilly drew the Tar Heels level both times before Hamm facilitated the game-winning assist. In the closing minutes of overtime, Hamm curled a corner kick into the penalty area, finding teammate Rita Tower for the game-winning goal. North Carolina advanced, ultimately avenging its only loss of the season in the national final.

No more than two months earlier had UConn handed North Carolina its first loss since 1985. The Huskies won the regular season matchup, 3-2 in overtime, but a rematch in the national championship game was dominated by the Tar Heels. UNC romped to a 6-0 win as Hamm tallied a goal in the win.

Hamm returned from the World Cup in 1992, helping UNC win its first 24 games. The Tar Heels had previously beat Duke twice and would play their ACC rival again, this time for a national championship. The Blue Devils scored first in the match before Hamm and the Tar Heels erupted for nine unanswered goals. Hamm found the back of the net three times, becoming the second player to record a hat trick in a national final.

Hamm capped her career at North Carolina with a fourth national championship. The Tar Heels’ win was their eighth consecutive title, a streak that began after George Mason beat UNC in the 1985 final. Eight years later, three points (one goal, two assists) from Hamm were more than enough to reverse roles as North Carolina rolled to a 6-0 win. She was named the tournament’s offensive MVP for a second straight year.

Here are some of the awards Mia Hamm won in college:

What records did Mia Hamm set in college and where does she rank among historical greats?

Here are some of the records Mia Hamm set in college and where she ranks on all-time statistical lists: