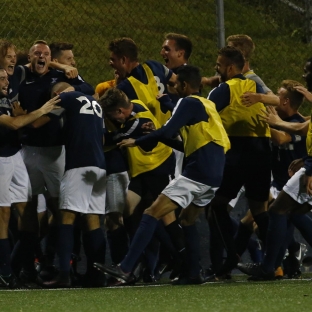 CINCINNATI – Redshirt sophomore Samson Sergi sent a header in for the game-winning golden goal in the 92nd minute as Xavier men’s soccer prevailed 1-0 in overtime against No. 9 Georgetown on Saturday at the XU Soccer Complex.

Sergi’s goal was his fourth of the season with junior Simen Hestnes getting the assist off a corner kick early in the extra period.

Redshirt freshman goalkeeper Zach Nelson came up with three massive saves in the second half to keep the Hoyas off the scoreboard as both teams pressed for a late goal.