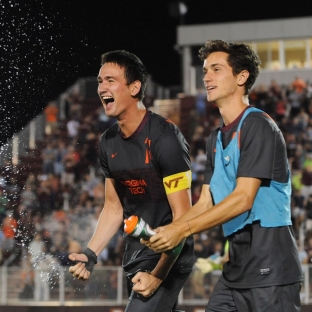 BLACKSBURG – The Virginia Tech men’s soccer team defeated top-ranked and previously unbeaten Notre Dame 2-1 Friday night at Thompson Field. The win, Tech’s first over a No. 1 team since 2011, takes the Hokies’ record to 4-4 overall and 1-2 in conference play.

The Hokies came up with two goals against a Notre Dame defensive unit that had given up three goals through the first six matches. Goalkeeper Chris Hubbard led the ACC with a 0.49 goals against average and notched five saves on the night.

Marcelo Acuna once again lead the line for Tech scoring his fifth and sixth goals of the season in dramatic fashion to earn the victory. The senior from San Jose, Costa Rica redirected a cross from Elias Tamburini into the back of the net in the seventh minute to put Tech in front.

The Irish got on the board through Jon Gallagher in the 50th minute. The forward latched onto a pass in the channel from Jeff Farina and put a shot on frame that was deflected but wound up in the back of the net, tying the match.

In the 71st minute, the Rory Slevin led a counter attack down the center of the pitch and set up Acuna with a through ball. Acuna dispatched the ball into the far post net with a spectacular curled effort, which proved to be the game winner.

Ben Lundgaard’s goal was under pressure all night, as Notre Dame managed 23 shots, but the senior captain came up with a career-high 10 saves on the night to earn the three points in the league.