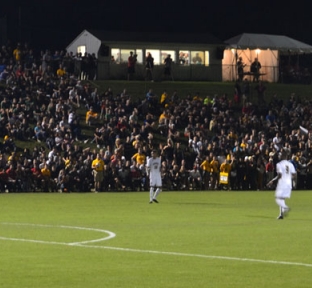 Men's soccer: UMBC draws with No. 1 Maryland in front of a record crowd

BALTIMORE, Md. – UMBC senior midfielder Gregg Hauck scored a game-tying goal in the 59th minute for the host Retrievers to hold on for a 1-1 double overtime win against the No. 1-ranked Maryland Terrapins.

The game was played before a record crowd of 3,766 at Retriever Soccer Park. The mark broke the previous record of 2,873 against Howard on August 28.

UMBC is now 5-2-2 on the campaign, while Maryland remains undefeated at 6-0-3. UMBC is now 1-0-2 in its last three meetings with Maryland.

A program record 3,766 fans packed in to Retriever Soccer Park for UMBC’s matchup with Maryland pic.twitter.com/OvXj341SpX

“This was a great crowd tonight. I’m proud of the fans and the Baltimore soccer community for their support tonight,” head coach Pete Caringi said after the match.

After a scoreless first half, Maryland got on the board in the 55th minute, as Donovan Pines knocked in a cross after a corner kick. But less than five minutes later, Hauck netted his tenth career goal, redirecting a feed from senior midfielder Sammy Kahsai.

“Can’t say enough about Gregg. He is one of if not the best in the air and he is the heart and soul of the team,” Carinigi said about Hauck.

Check out the highlights from last night as @UMBCMensSoccer

Both teams had their chances late in regulation, but both goaltenders stood the task as the contest went to overtime.

WATCH: Virginia beats the buzzer with game-winning goal as time expires against Davidson

In the extra session, the Terps had all the chances in the first ten minutes, but each time UMBC keeper Ciaran O’Loughlin made sprawling saves to keep the match tied. The final ten minutes saw the Retrievers with the run of play as Colin Weyant ripped a shot that was saved, followed by Cormac Noel that went just wide as the match ended in a 1-1 draw.

O’Loughlin made seven saves for UMBC, while Dayne St. Clair captured five for the visitors. Maryland outshot UMBC 24-12, with Noel leading the Retrievers with five shots.