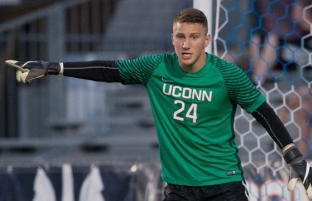 In two of Scott Levene’s three seasons as starting goalie, the UConn men’s soccer team has missed the NCAA Tournament.

When the season starts Friday against Iona at 7 p.m. at Morrone Stadium, Levene, a redshirt senior, will be making his 53rd straight start in net for the Huskies. It is the third-longest consecutive start streak in program history behind Josh Ford (85) and Andre Blake (56).

“He knows it is his last shot to leave his mark as another top goalkeeper to have played at UConn and help the team make a deep run,” goalie coach Andy Parker said.

RELATED: 10 must-see men’s soccer games to kick off the season | Names to know

The UConn-Iona game is part of a doubleheader. At 3 p.m., the UConn women’s team, which opened the season with a 1-1 tie against Syracuse on Monday, faces Yale. Both teams enter the season ranked in the top 25 in the United Soccer Coaches Association preseason poll — men, 24; women, No. 21.

The men went 11-7-1 and missed the NCAA Tournament last year.

“UConn soccer is traditionally known as a tenacious, fast-paced team, and I think we have that this year,” Levene said.

In five years with the Huskies, Levene has a come a long way. He’s gone from a redshirt freshman to a member of the second team to one of the team’s main leaders the past few years. But this season he faces new pressure. Despite six shutouts and a goals against average of .77 in 2016, Levene had to win his job back this offseason after an erratic junior season.

Ready to rock Morrone tomorrow tonight? We will see you at our home opener vs. Iona at 7 pm. Free tickets for students! pic.twitter.com/NDKFrvpNau

Levene, who won the spot back over Austin Aviza and Bailey Bassett, posted five straight shutouts in the middle of last year and was 26th in the nation for his goals against average. But it was the mistakes that stuck with him and the coaching staff.

“I think he has made a lot of big saves, but last year there were three or four situations where he had major blips that cost us games,” coach Ray Reid said. “There were other games he won it for us single-handedly. He’s got to be confident and he’s got to be consistent from Day 1.”

To become better in net, he is looking at the game in tighter segments.

“[Assistant] coach [Mike] Miller says your mind should be so tired after every single game that all you want to do is go to sleep,” Levene said. “What I’m trying to do this year is I’m not looking at the games in 90 minutes. I’m looking at it in five minutes [here], five minutes [here]. I’m breaking it down in small steps.”

After putting in a lot of work this offseason, Levene is eager for one last chance for the Huskies.

This article is written by Matthew Conyers from The Hartford Courant and was legally licensed via the Tribune Content Agency through the NewsCred publisher network. Please direct all licensing questions to legal@newscred.com.