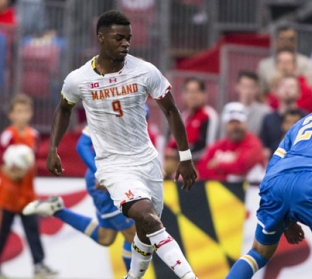 COLLEGE PARK, Md. — It was déjà vu Friday night as junior Sebastian Elney scored the game-winning goal in the 98th minute to lift No. 6 Maryland past No. 15 UCLA 3-2 in overtime at Ludwig Field.

Elney, who also posted the game-winner against UCLA in dramatic fashion in 2015, snagged a terrific pass from senior Jake Rozhansky and slipped it through traffic to the far corner for the win. Maryland (3-0) has already scored nine goals this season.

Gordon Wild kicked off the scoring for Maryland, nailing a penalty kick after a UCLA handball in the box in the 56th minute. But the Bruins answered as Brandon Terwege hit a ball off the crossbar and Erik Holt connected on the follow-up for a tie game at 67:35.

Eryk Williamson took advantage of a failed Bruin clear and found freshman Eric Matzelevich who scored from 15 yards to regain the lead in the 73rd minute. UCLA once again found the equalizer in the 80th minute when Brian Iloski scored his third goal of the season with a pretty free kick from just outside the box.

Elney provided the fireworks once again with less than two minutes to play with his game-winner and subsequent leap into the stands.

Friday’s crowd of 7,532 was the fourth-largest in Ludwig Field history.

“I’ve said that this is one of the special nights in college soccer and once again that proved to be true. This was a really hard-nosed, highly competitive college soccer game,” head coach Sasho Cirovski said. “I give UCLA a lot of credit. They came in here and they pressed us, pushed the game and found a way to come back into it. But I’m also extremely proud of our team for once again finding the quality and character to come out on top. Again it was a goal worthy of a winner. It was an incredible pass from Jake Roshansky and a sublime first touch by Sebastian Elney who once again scored against UCLA. We’ve seen that celebration before and it was very special. It’s gratifying to find a way to win when you feel that you weren’t at your best.”

Maryland next plays host to Cal Poly on Monday at 7 p.m. ET at Ludwig.