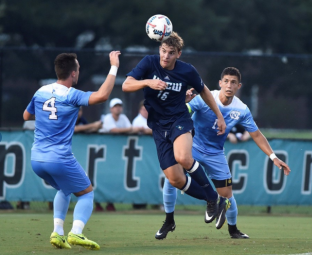 WILMINGTON, North Carolina – Freshman defender Hjalmar Ekdal’s goal in the 27th minute proved to be enough as UNCW posted a 1-0 victory over No. 3 North Carolina in front of 1,778 fans at UNCW Soccer Stadium on Friday evening.

The win allowed the Seahawks to remain unbeaten with a 3-0-0 record. Meanwhile, the Tar Heels suffered their first loss of the season following wins over No. 12 Providence and Rutgers.

Ekdal, the reigning Colonial Athletic Association Rookie-of-the-Week, tallied his second goal of the season when he headed in a corner kick from junior midfielder David Lozano with 18:44 left in the first half.

Hjalmar Ekdal heads it in to put UNCW up 1-0 over UNC. pic.twitter.com/PzgmlwgHt7

North Carolina, which had a six-game unbeaten streak that dated back to last season snapped, outshot the Seahawks by a 12-6 margin. Redshirt freshman goalkeeper Drew Romig recorded two saves in the loss.

UNCW recorded its fourth win over an opponent ranked in the top five since 2003.

The win over the Tar Heels marked the highest-ranked opponent the Seahawks have defeated since upending No. 1 UNCG on Nov. 3, 2004.

The attendance of 1,778 fans marked the third-largest crowd in UNCW Soccer Stadium history.

Cretens moved into a tie for eighth place in program history after notching his eighth career shutout.

Four of the last five meetings against North Carolina have been decided by a one-goal margin.

UNCW is now 7-6-0 against nationally-ranked opponents over the last three years.

The Seahawks earned their first win over an ACC opponent since a 3-0 victory over Duke on Sept. 15, 2015.

North Carolina entered the game tied with Evansville for the NCAA lead with 10 goals.

The Seahawks face their second consecutive nationally-ranked ACC opponent on Monday, Sept. 4, when they visit No. 12 Virginia for a 7 p.m. contest against the Cavaliers.