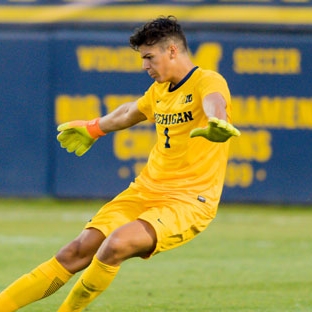 Men's soccer: Michigan holds No. 12 Western Michigan scoreless in first half in 1-0 loss

The Wolverines held the vaunted Western Michigan attack without a shot for the opening 30 minutes of action. UM’s best chance came five minutes into the match as freshman Mohammed Zakyi found himself with an opportunity inside the finishing third. From the left side of goal, his attempt rang off the near post.

The Broncos, which entered the match fourth in the NCAA in goals with 18 on the year, found the breakthrough off a long throw-in in the 51st minute. The sequence was finished off by midfielder Kosti Moni to give WMU a 1-0 lead and the eventual match-winner.

UM found itself playing against a 10-man Bronco side for the final 19 minutes of the match as Bronco Alex Ruddock was sent off for conduct. Seconds later, Zakyi had another solid chance that was pushed wide. The Maize & Blue continued its pressure, outshooting WMU, 5-2, over the rest of regulation.

In the 76th minute, sophomore goalie Andrew Verdi, who had a pair of stops on the night, made an outstanding save on a Bronco attacker to hold the deficit at one goal.

UM continued to press in the final minutes as a corner from junior Marcello Borges trickled off a half clearance to classmate Robbie Mertz, but the final Wolverine chance of note was blocked.