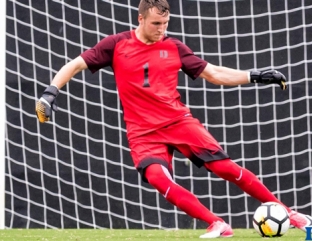 WASHINGTON, D.C.—Duke senior Brian White and rookie Daniel Wright both tallied goals and freshman goalkeeper Will Pulisic made eight saves to lead the 19th-ranked Blue Devils to an upset of 10th-ranked Georgetown in Washington D.C. Monday afternoon. The win is the 10th for Duke this season and second over a top 25 opponent.

Duke improves to 10-2-1 overall, while Georgetown falls to 8-2-1. The Blue Devils handed the Hoyas their first home loss of the season.

Pulisic’s eight saves were a career-high as Georgetown outshot Duke 19-8 overall, including 13-5 in the second half. Seven of Pulisic’s saves came in the second period.

Neither the Blue Devils nor the Hoyas were able to create many quality scoring chances in the opening 45 minutes. However, it was Duke who took care of business when the opportunity came in the 25th minute. Jack Doran, active on the left flank for Duke as the half progressed, served a flighted ball into the box about 12 yards from goal where White got his head on it and perfectly hit back to the near post for his eighth goal of the year and second in as many games.

Blue Devils returning to Durham like…. 2 road dubs in 4 days. Devils are on . #GoDuke pic.twitter.com/3yUf12jwXR

Georgetown controlled much of the run of play in the second portion of the first half, but quality defense from the Blue Devils kept the Hoyas at bay. The nation’s 10th-ranked squad had a few promising chances, but were unable to finish, sending Duke into halftime with a 1-0 lead for the eighth time this season. The first 45 minutes feature just two shots on goal and nine combined shots overall.

After the break, the Hoyas picked up where they left off in putting Duke’s backline under immense pressure. Individual efforts from Markus Fjørtoft and the Duke defense kept Georgetown from equalizing in the early portion of the period. However, the Hoyas broke through with the tying goal in the 66th minute when Derek Dodson put away a rebound from the back post.

All square at 1-1, Wright took matters into his own hands just 1:09 later. The crafty attacker turned in an outstanding individual effort beating Georgetown defenders down the left flank and getting to the near post where he slid the ball past JT Marcinkowski to the far post for his first career score and a 2-1 Blue Devil lead.

With his goal today, Brian White moves into a tie for first in scoring in the ACC. 8 and counting for the senior. #dukefacts pic.twitter.com/vQv7aLI1Hf

The Hoyas did not go away, giving Duke all it could handle in its defensive third. Pulisic and the defense were up to the task and holding Georgetown off. It was a heart-stopping final 90 seconds though for Duke as Georgetown made its way into the penalty box and earned a corner kick. The header from Mason Deeds with 45 seconds left was saved from Pulisic as the Blue Devils came away with its third road victory of the year.