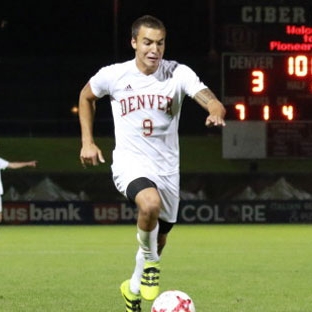 Shinyashiki’s brace is his second in a season opener in his three years with the Pioneers, also finding the back of the net twice on opening night in 2015 against UC Riverside.

Shinyashiki gave Denver its opening goal just shy of the nine minute mark. Redshirt-senior Kyle Morlack chipped it in behind the Eagles’ backline for Shinyashiki, who smashed a one-time volley into the twine to give Denver the early breakthrough. DU scored just twice in the opening quarter hour a year ago.

Just shy of 10 minutes later, FGCU’s Nicolas Samayoa found the equalizer off a corner kick near-post service from Dennis Zapata. Samayoa’s glancing header tucked into the far-post side netting to level the match for the visitors.

Redshirt-junior Nick Gardner was only called upon to make two saves on Friday, both of which came in the 53rd minute. Samayoa was looking for his second on a long-range free kick that was hit with pace and deflected by a Denver defender. Gardner stayed patient and reacted well to get a hand on the deflection, and got up quickly to save the follow-up attempt from Shak Adams to keep things at 1-1.

Denver got a restart goal of its own in the 73rd minute to take the lead back at 2-1. Senior co-captain Alex Underwood played the ball into the penalty area from the right channel, 10 yards into his attacking half. Redshirt sophomore centerback Dan Mooney flicked an Eagles’ failed clear to the feet of Elder who riffled a shot past FGCU’s Jared Brown to put the Pioneers back on top.

Shinyashiki ran onto a miss-touched pass in the 78th minute and scored from outside the 18 on his first touch to give Denver a two-goal cushion.

UP NEXT: The Pioneers continue their four-match homestand to open the regular season on Monday when the Pioneers welcome Akron to the Mile High City. Kickoff is set for 7 p.m. MT, and will be broadcast live on Altitude.