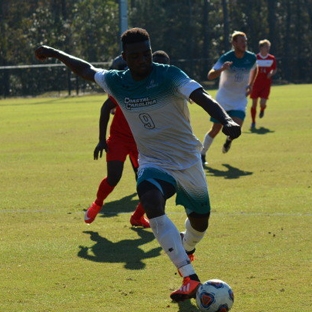 Men's soccer: Coastal Carolina takes down No. 3 Maryland in shutout

COLLEGE PARK, Md. – For the second consecutive match, the Coastal Carolina men’s soccer team pulled an upset on the pitch and this time it was on the home field of the Maryland Terrapins, who came into the match ranked as high as second in one of the latest polls.

The Chanticleers scored its lone goal, and the lone goal of the match in the 38th minute when Frantzdy Pierrot scored on an assist from Ryan Willougby. It was Pierrot’s fouth goal of the season and Willoughby’s first goal and on top of that, his first point of the season.

The Chanticleers defense was outstanding the entire match. They held the home-standing Terps to only four shots in the first half and three in the second. Meanwhile the Chants kept the pressure on Maryland with 11 shots and five corner kicks.

MORE: Oregon State forces overtime in win over No. 17 Cal

Once again, Braulio Linares-Ortiz played the entire 90 minutes in goal and had three saves, all in the first half, in picking up his third shutout of the season.

Offensively CCU was led by Pierrot who had three shots and Martin Melchor added two.

The victory gives CCU a season-long three consecutive and pushes their record to 7-6 overall, putting them over .500 in the win column for the first time this season. Maryland now stands at 10-2-3 on the season.