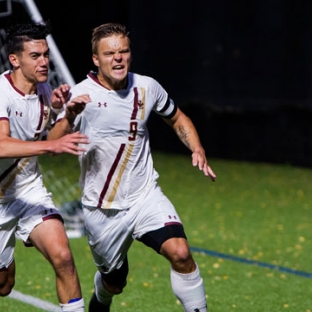 NEWTON, Mass. – Simon Enstrom converted a penalty kick in double overtime to give the Boston College men’s soccer team a 2-1 win over Providence on Tuesday night at the Newton Campus Fields.

Afer a scorless first half, BC’s center back Abe Bibas staked the Eagles to a 1-0 lead in the 52nd minute when he headed a shot over Providence goalkeeper Colin Miller after Raphael Salama flicked on Heidar Aegisson’s throw-in.

Boston College (3-4-0) withstood mounting pressure from the Friars – who finished the game with a 21-14 edge in shots – as regulation wound down, but Providence (2-4-1) finally broke through in the 85th minute when Mac Steeves slammed home Matt Deperro’s short pass in the six-yard box.

Neither team had a solid chance in the first overtime session, but Providence nearly capitalized on an inswinging cross by Braden Kline from the right that nicked off the crossbar at the start of the second session.

After a quick flurry by the Friars in front of Antonio Chavez Borrelli’s goal, the Eagles then countered and Younes Boudadi came down the right wing and got a cross off for Enstrom in the area. He rose up with a defender, but came down on his back. However, the Friars’ back was whistled for a handball and BC was awarded a penalty. Enstrom claimed the chance and beat Miller to his right to seal the win for the Eagles.