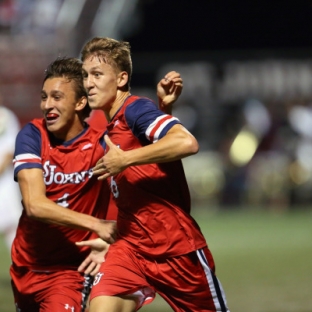 The regular season is winding down but there isn’t a shortage of drama and storylines in men’s soccer. Wake Forest claimed the No. 1 spot in the United Soccer Coaches poll, top-10 teams Clemson and Georgetown both suffered losses, and on Sunday, the DI Men’s Soccer Committee revealed the top 10 teams in the sport.

Here are the best goals from Week 9 of men’s soccer action.

What a night it was for the St. John’s men’s soccer program. Coach Dr. Dave Masur picked up his 400th career win, becoming just the 19th coach all-time to reach that milestone as the Johnnies defeated No. 10 Georgetown 1-0 on an incredible finish by David Enstrom. Enstrom’s teammates Alistair Johnston and Harry Cooksley deserve just as much praise for the sequence of passes that led to the goal. Watch the incredible score below.

St. John’s deserves a second shoutout for Week 9 because of Filippo Ricupati’s incredible acrobatics inside the box against Villanova, followed by his game-winning header in double overtime.

Louisville senior captain Tim Kubel scored the game-winner for the Cardinals in their 2-1 road win against No. 4 Clemson. He netted a free kick in the 60th minute.

It was senior night for North Carolina on Friday but it was redshirt sophomore Jelani Pieters who scored the game-winner in the Tar Heels’ 3-0 win against Notre Dame. He scored in the 34th minute with a beautiful header by the near post.

What a way to send off our seniors! #GoHeels pic.twitter.com/NZJibrO4jr

The River Hawks picked up their biggest win of the season thanks to Ivan Blaskic’s game-winner in double overtime to knock off No. 17 New Hampshire.

You get one guess who scored… Ivan Blaskic with the heroics to knock off No. 17 New Hampshire! #AEMSOC #RiseUp @NCAASoccer pic.twitter.com/UHg7o96De6

Duke clinched a first-round bye in the ACC tournament with a 1-0 win against No. 13 Virginia. Daniel Wright scored the game-winner on a volley that found the back of the net.

ICYMI – Max Moser Daniel Wright . What a great goal from a rookie to put #Duke at No. 4 in the ACC! #letsgoduke pic.twitter.com/WBRRMIypXj

Michigan junior forward Francis Atuahene scored his fourth goal of the season in the Wolverines’ 1-0 win over Detroit. Atuahene cleaned up a rebound in the 74th minute.

Butler clinched the Big East regular season championship on Saturday with a 2-1 win over Marquette. The Bulldogs scored twice in the span of 41 seconds early in the second half. Joe Moulden started the scoring with a beautiful header. You can watch the goals beginning at the 0:27 mark below.