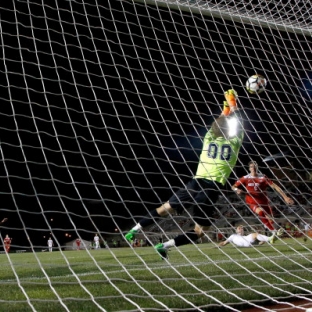 Men's soccer: Best goals from the opening night of the season (Video)

The 2017 men’s soccer season kicked off on Friday night, and there was no shortage of compelling games and highlight plays. Here are videos of some of the best goals from opening night.

RELATED: 10 must-see games to kick off the season

Denver had as productive a season opener as any team in the country. The No. 3-ranked Pioneers defeated No. 23 Florida Gulf Coast 3-1, thanks to a pair of goals from junior striker Andre Shinyashiki. His first was a one-time volley in the ninth minute after a chip from Kyle Morlack. The striker’s second goal came in the 78th minute when he capitalized on a poor touch from Florida Gulf Coast’s back line.

#GoalClip: Andre picks off a back-pass and buries it into the open net to give the Pioneers the 3-1 win. #DU1NATION #DENvFGCU pic.twitter.com/RrvBE6boNo

After falling behind 1-0 against Akron, Florida Gulf Coast tied the game thanks to a beautiful header from Nicolas Samayoa in the 19th minute. Samayoa ran to the ball off a corner kick and dove forward, sending the ball into the back of the net on the far right side of the goal.

Jelani Pieters scored the winner in the 63rd minute following a give-and-go with teammate Zach Wright. Pieters elevated and maintained massive hangtime – long enough to flick the ball over a Providence defender and the goalkeeper. The sequence begins at the 1:46 mark below.

Watch the best from tonight’s victory over No. 12 Providence as we start our 2017 campaign with a W pic.twitter.com/7ehTNkfVZn

In one of the better executed set pieces you’ll see this season, Joao Serrano bent a free kick around North Carolina’s defensive wall and past the Tar Heels’ diving keeper. His goal tied the game 2-2. You can watch the play below, beginning at the 1:29 mark.

Watch the best from tonight’s victory over No. 12 Providence as we start our 2017 campaign with a W pic.twitter.com/7ehTNkfVZn

Sophomore midfielder Giuseppe Barone cleaned up a broken play inside SIU-Edwardsville’s box with a back-heel flick with his right foot, followed by a laser of a shot with his left foot. He scored the only goal of the game in the Spartans’ victory.

Game winning goal from @gypsy_barone for a 1-0 win over SIUE! #GoGreen pic.twitter.com/QPobb4EafY

Junior Adrien Cabon had himself a game in Louisville’s season-opening win against UC Irvine. He scored both goals – the first two of his career – in the Cardinals’ 2-1 victory, both in the span of four minutes. His first goal came after he settled the ball, setting up a right-footed shot from 21 yards out that found the top-right corner of the goal. You can watch the play beginning at the 0:42 mark below.

Virginia defeated Villanova 3-2 in double overtime, and Faris Abdi scored a well-placed first-career goal in the 53rd minute. He made a run down the left side of the field, gathered the ball with one touch, and blasted a left-footed strike across the goalkeeper into the right side of the goal. You can watch the play beginning at the 1:14 mark.

Villanova forced overtime against Virginia thanks to Luca Mellor’s equalizer in the 69th minute. The Wildcats had a corner kick and Mellor was quick to react with his left foot to capitlize on the opportunity. You can watch the play below at the 1:50 mark.

Junior forward Michael Prosuk scored the game-winner for the Buckeyes in their season-opener with less than a minute remaining in the game. He beat Pittsburgh’s back line and finished off a rolling cross to put Ohio State up 1-0.

Hofstra opened its season with a shutout win against Penn State. Senior Danny Elliott scored the only goal of the match, an absolute rocket with his left foot that landed in the side of the net on the far side of the goal.

The No. 1 team in the land began its 2017 campaign with a 4-0 win against San Jose State. All four goals can be seen in the video below.

The Demon Deacons scored five goals in their season-opening win against Rutgers, and the Wake Forest men’s soccer account compiled all of them into one gif.

It’s hard to fit five goals into one GIF…but…here you go! pic.twitter.com/SWk1YfmMSD