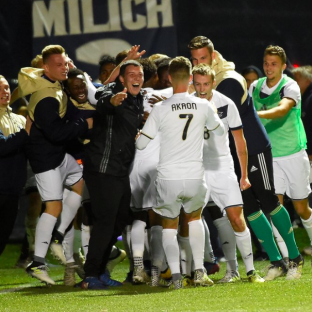 AKRON, Ohio – The 13th-rated University of Akron men’s soccer team added another signature win to its resume on Tuesday, Oct. 17, as the Zips (9-3-1) registered a 2-0 triumph past eighth-ranked Notre Dame (9-4-1) at FirstEnergy Stadium – Cub Cadet Field.

Senior Sam Gainford and sophomore Nick Hinds accounted for Akron’s offensive production in the affair to lead the Zips to their seventh home victory of the season.

The Fighting Irish began the evening on the attack and registered the first shot on goal only 36 seconds into the affair, a strike by Thomas Ueland that was punched out for a save by redshirt freshman goalkeeper Tor Saunders.

Senior Pau Belana collected a shot on frame for Akron in the fifth minute (4:57), one that was pulled in for a stop by Notre Dame’ goalkeeper Chris Hubbard.

Saunders against recorded the save of a strike by Jon Gallagher at the 17:55 mark to keep the contest scoreless.

88’ GOAL- Another penalty after a breakaway Holthusen was brought down. Gainford’s PK is saved, but Hinds follows it up! 2-0! #ZipsGameday pic.twitter.com/kbp6zJ0R3o

Sophomore Marcel Zajac nearly gave the Zips the first goal of the evening with a sidewinding shot from the middle of the box in the 25th minute (24:30) that went just high of net. Redshirt sophomore Skye Harter (Copley, Ohio) delivered a corner kick into senior Manuel Cordeiro, who set up Zajac on the scoring attempt.

Senior Stuart Holthusen added another strong shot at the 28:31 mark, one that was blocked to thwart the scoring chance.

Redshirt junior Ezana Kahsay was able to draw a foul in the box on the Fighting Irish in the 35th minute (34:59) to set up a penalty kick for Akron. Stepping to the line a delivering his team-leading fifth goal of the season was Gainford, who had entered the contest at the 29:38 mark.

The Zips closed the half owning a 5-2 advantage in shots, with each side posting a pair of shots on goal, and took a 1-0 lead into the intermission.

WATCH: The best goals from Week 7 of men’s soccer

Saunders was again tested to open the half as Jeff Farina unfurled a shot at the 46:16 mark that was denied with the save.

Blake Townes nearly netted the equalizer for Notre Dame in the 55th minute (54:34) as his strike from the top of the box was stopped with a save from Saunders.

Holthusen had his shot at the 76:36 mark go just wide corner of the net before getting a 1v1 opportunity in the 79th minute (78:10) that appeared destined for another penalty shot, but the call of a foul in the box was not awarded on the play.

Junior Morgan Hackworth and Holthusen belted shots on goal in the 84th (83:23) and 85th (84:53) minutes, respectively, for Akron that were again denied by saves from Hubbard.

Final stats for the evening, another big win for the Zips. Join us Saturday for Soctoberfest and our game with BGSU! #ZipsGameday #AkronMade pic.twitter.com/ZXIa67tkQH

Holthusen continued to work offensively and was able to draw a foul just inside the box at the 87:38 mark that resulted in another penalty kick opportunity for the Zips.

Gainford stepped to the line and delivered a ball that Hubbard deflected for a save. Knocking in the deflection for his third goal of the season was Hinds, with Gainford earning the assist on the tally.

Sparked by an 8-4 margin in second-half shots, including 4-2 on goal, the Zips finished the evening outshooting the Fighting Irish, 13-6.

Akron garnered a game-high three shots apiece from Gainford and Holthusen, while Cordeiro contributed a pair of shots for the Zips. Directing the Notre Dame attack with three shots was Ueland.

Notching a career-high four saves en route to collecting his second clean sheet of the season, and sixth of the year for Akron was Saunders. Hubbard matched Saunders pulling in four saves for the Fighting Irish.