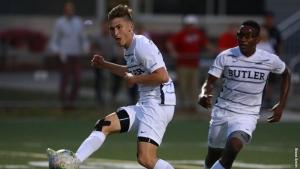 
Butler took advantage of nearly every opportunity it had Tuesday night in knocking off No. 5 Indiana, 2-1, at the Sellick Bowl in Indianapolis.

A raucous crowd of 4,312 witnessed the Bulldogs’ victory as the home team improved to 4-3 on the season. Tuesday night marked the first loss of the season for the Hoosiers (4-1-2).

Butler keeper Gabriel Gjergji was stellar in goal throughout the night. His diving save on Victor Bezerra’s penalty kick in the 17th minute provided a momentum swing that the Bulldogs sorely needed.

Six minutes later, Brandon Guhl converted Butler’s first shot of the night into a goal, taking a long pass from beyond midfield from sophomore Jack Haywood, getting it to his feet between Indiana’s two center backs, and beating IU keeper Sean Caulfield with his right foot from eight yards out.

Guhl’s goal would be Butler’s only shot of the first half. Gjergji made four saves in the opening 45 minutes. Indiana had back-to-back corner kicks in the final minute of the first half, with a header finding the net just after time expired.

Butler senior captain Alex Lehtinen put the Bulldogs up 2-0 in the 52nd minute, taking a pass from Wilmer Cabrera, Jr., and sending a low liner inside the right post.

The Bulldogs nearly put the game out of reach in the 68th minute as Logan Lee got loose on a counter-attack, but his right footed shot from 12 yards out caught the right post after having Caulfield beat.

Indiana continued on the offensive, largely with shots off target over the final 35 minutes. The Hoosiers were able to cut the lead in half in the 83rd minute when a Butler defender headed down an Indiana corner kick, finding the feet of Jack Maher, who deposited the ball.

Over the course of the final minutes, Butler was able to withstand an onslaught of pressure, making enough clears to secure the win.

Butler will host its third consecutive Top 10 opponent when BIG EAST foe St. John’s, ranked No. 9 in this week’s national poll, visits the Sellick Bowl Saturday night. The kick is set for 7 p.m.