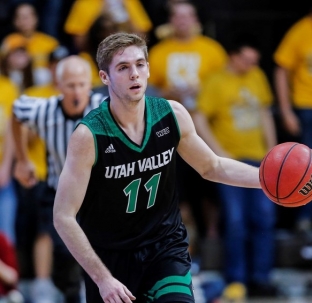 Still time to light a candle for the Utah Valley Wolverines. It’s now one month until their “Toughest 24 Hours in College Basketball History.”

That’s the theme on the school’s website, anyway, and who could question it? Look where the Wolverines will be a month from Tuesday, when the season opens. In Rupp Arena, playing Kentucky.

And look where they’ll be the very next night. In Cameron Indoor Stadium, 340 miles away, playing Duke.

So, uh, coach Mark Pope. You sure about this?

The @UVUmbb team was featured as @kevconnorsespn‘s Star of the Night (June 10) on ESPN’s @SportsCenter. Here is the video. #Toughest24 pic.twitter.com/Ub0PjGg2VS

Ah, but there’s method to this madness. He’s thinking March.

“I think our guys are excited to go be tested, I think we’re excited to go see what the best teams in the country are doing, how they look and how they feel,” Pope said. “In the back of our minds, certainly our goal is to play in the NCAA tournament and (if they do), we’re going to end up playing one of these teams, or one like it, right?”

He also understands to win the conference tournament requires multi-day competition with no letup. The WAC is good, but it’ll never throw a Kentucky-Duke 1-2 punch at the Wolverines.

“There’s a lot of great things about it. Among those is just the fact our guys have known for the last three months that that’s how we open the season. So I think they go to bed every night a little bit more anxious and get up a little more eager to get back in the gym, and that’s all good for us.”

His players second the motion.

“Every day has been a little bit of a different mentality, just knowing what we’re up against,” said junior guard Conner Toolson, whose 11.9 points per game average led the Wolverines last season. “I was pumped when I found out. I couldn’t wait to go home and show my friends and show my family.

“I’ve been watching those teams my whole life growing up, and now I’m going to have the chance to play in those arenas.”

Here are some things we should know about Pope and Utah Valley.

–He played for Kentucky’s 1996 national championship team, and scored four points against Syracuse in the title game, so he knows what he’s getting into, visiting Rupp. “My guys are fully aware that Kentucky just had a pro day with 90 NBA scouts and executives,” he said. “I didn’t even know there were 90 NBA scouts and executives, and they were all in one gym to see one team.”

–The Wolverines return five of their top six scorers from a 17-17 team that had a flair for the dramatic. They rallied from 27 points down to beat Denver 88-85, got the school’s first-ever win over BYU in a 114-101 shootout and ended New Mexico State’s 39-game conference home winning streak with a 84-72 win.

–Pope watched his team struggle at mid-season – worn down, he said, from its rugged non-conference road – but then revive and advance to the CBI semifinals, with the first two postseason tournament wins in school history, both on the road.

“We flat-lined and played some really bad basketball in the middle of the season,” he said. “But what I was really proud of with my team last year is these guys found a way to pick themselves off the mat.”

So why not a weekend bender on blue bloods to get this season started?

“We just doubled downed on it. We said we think we can withstand an impossible non-conference schedule.

The makeup of the Utah Valley roster suggests a team that will travel east with purpose.

“Fourteen of my 16 guys have transferred, so for one reason or another, things did not go the way they expected at their first program,” Pope said. “So everybody on my team has a big-time, huge chip on their shoulder. I don’t think I have a lot of fear on my team.

“We’re not the blue bloods or the chosen ones, but we sure do work hard.”

RELATED: What last season’s Sweet 16 teams bring back in firepower

Said Toolson, “We all have our different stories and our different pasts . . . I think we transferred to UVU to be able to prove something.”

Boy, is this ever the chance.

“We’re not holding anything back.” Toolson said. “We’re going for everything.”

Lots of Utah Valley folks want to see it. The Wolverines will be taking a charter flight that weekend, accompanied by a regiment of fans who helped defray the costs.

Utah Valley has visited hot spots before. The Wolverines opened last season at Gonzaga – losing 92-69 – and that might be as tough an assignment as Rupp Arena.

Their next game was five days later, at home against Idaho State. Duke in Cameron in 24 hours is the basketball version of a different kettle of fish. Nobody has gone where Utah Valley is going, one month from now.