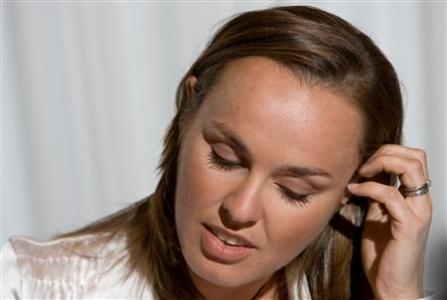 Former top-ranked tennis player Martina Hingis is being accused of savagely beating her estranged husband after she and her mother stormed his apartment late Monday night and smashed a DVD player over his head.

According to Guyism.com, Thibault Hutin also told Swiss police Hingis threatened to “send Russians” after him if he continued to cause her problems. Hutin added that Hingis’s mother boyfriend was also with them when they beat him to a bloody pulp.

Earlier this year, Hutin accused Hingis of cheating on him multiple times which ultimately led to their separation. He reportedly caught her in bed with another man less than a year after their marriage.

Hutin also told police his upbringing forbids him from fighting back against women, but that didn’t lead Hingis or her mom to show him any mercy.

“Martina and her mother, Melanie Molitor, pounced on me, beat me and scratched me,” told Guysim. He later added his passport and credit cards were taken during the fracas. No formal charges have been filed in the case.

Hingis was given a wildcard doubles entry for this week’s Pan Pacific Open in Tokyo but withdrew citing personal reasons just before Hutin went public with his claims.