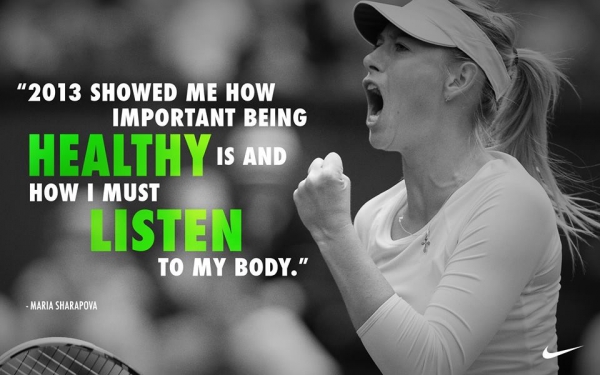 The Maria Sharapova makeover for 2014 includes more than a new coach.

The 26-year-old tennis star waxed philosophical on her Facebook page about one of the lessons she learned from the 2013 season.

“Women’s tennis is getting faster and the girls are getting more athletic, so I need to push myself to become a better athlete,” Sharapova said on her page. “I think 2013 showed me, like a few other years how important being healthy is and how I must listen to my body. During this off season I have been a little smarter on how I train and how I treat my body.”

Whether Sharapova’s new coach, Sven Groeneveld, had any input in her discovery is unclear. Sharapova hired Groeneveld last month, putting to rest a 2013 year of upheaval.

After looking strong early at the Australian Open, she lost to Li Na in the semifinals.

Sharapova rebounded with strong play, but her loss to nemesis Serena Williams in the final of the French Open was especially frustrating – it was her 12th straight loss to the world’s top-ranked player.

The two exchanged a war of words just before Wimbledon about boyfriends, and Sharapova suffered a second-round loss to Michelle Larcher de Brito at Wimbledon. Shortly after, she parted ways with coach Thomas Hogstedt.

Sharapova then made an unlikely coaching hire in former No. 1 men’s player Jimmy Connors. That union lasted one match, a loss to Sloane Stephens in Cincinnati. Sharapova had a won the first set and was ahead 2-0 in the second before suffering a 2-6, 7-6 (5), 6-3 loss.

She fired Connors after the loss, and then was planning a publicity stunt for the U.S. Open by changing her name to “Sugarpova” to promote her candy business. That idea was shot down, followed by Sharapova’s withdrawal from the tournament because of a shoulder injury.

The drama will put her under the microscope for the 2014 season.