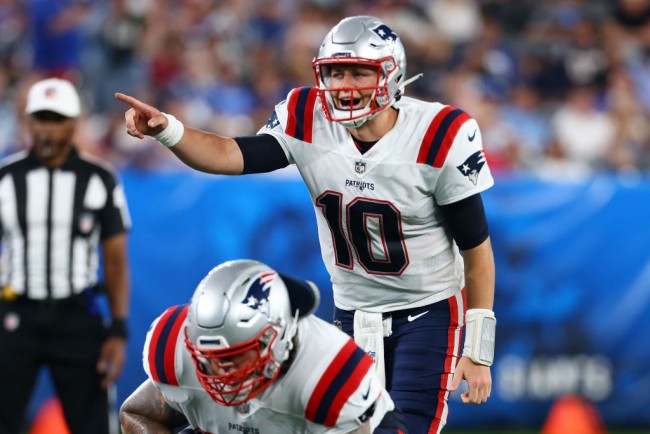 We are less than two weeks away from the start of the 2021 NFL season, and the New England Patriots still have no idea who, between Cam Newton and Mac Jones, will be their starting quarterback for their Week 1 game against Miami Dolphins.

Head coach Bill Belichick made the stunning admission on Sunday after New England’s 22-20 victory over the New York Giants in their preseason finale. When ESPN‘s Mike Reiss asked if he had decided on his Week 1 starter, Belichick replied, “No, we still have a lot of decisions to make.”

There’s no question Mac Jones is making Belichick’s life difficult with his outstanding play this preseason. He further bolstered his case to be the Pats’ starting QB with a stellar showing in the game against the Giants, completing 10 of 14 passes for 156 yards and a touchdown.

Mac Jones on that last drive: 3/4 for 50 yards and an excellent touchdown pass. (Via @BenBrownPL)

Jones was on fire on Sunday, relentlessly pushing the ball downfield against the Giants as he completed passes of 21, 19, 27, and 30 yards. His touchdown pass to Isaiah Zuber was a thing of beauty, delivering a 17-yard bullet in stride for the score. Jones finished the game with an incredible 131.8 passer rating after six possessions.

He completed 36 of 52 passes (69%) for 389 yards and a touchdown through the three preseason games he played in, which the Patriots all won. Jones was sacked five times during that stretch, four of which came in the finale against the Giants.

Newton left the door open for Jones to snatch the QB1 post after a sub-par showing against the Giants. The veteran quarterback led two drives against New York, completing just 2 of 5 passes for 10 yards with one interception.

That pick, however, should have been hauled in by Jakobi Meyers but Giants linebacker Blake Martinez played spoiler, stripping away Newton’s perfect deep ball for the interception. That was the first turnover by either Jones or Newton this preseason.

That being said, Newton is still the favorite to be the Pats’ Week 1 starter, given that he has been the one playing with New England’s first-team offense the most this preseason. When Newton returned to practice after a three-day absence due to a misunderstanding regarding the team’s COVID-19 protocols, he was given top dog status and not Jones.

That being said, Belichick can’t go wrong with either Newton or Jones as his starting quarterback for the 2021 season.