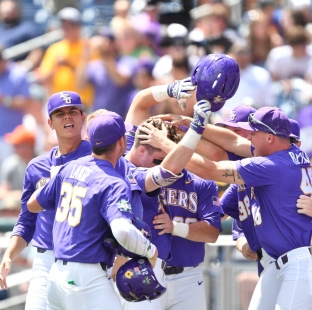 Have a day, Michael Papierski.

HR from the right side:

HR from the left side:

Michael Papierski is a STUD. pic.twitter.com/zDn1X1ChH7

Making the feat even more impressive is that the switch-hitting catcher first did it batting lefty in the second inning, then stood in the right-handed batter’s box and went yard again in the fourth.

Stepping up against Beavers starter Bryce Fehmel with two on and two out in the second, the catcher swung at a 3-1 pitch and hit a towering drive that carried into the stands in right-center to put the Tigers up 3-0.

Michael Papierski gets the scoring started with a 3-run BOMB!! 3-0 LSU in the 2nd. #CWS pic.twitter.com/JHLV8oIXQY

After LSU tacked on another run in the third and chased Fehmel from the game, the switch-hitter turned around to face the lefty Brandon Eisert. This time it was a 2-1 pitch that he put a great swing on and lifted it out to left field.

Michael Papierski becomes the first player to ever hit 2 HRs in a #CWS game at TD Ameritrade Park Omaha! pic.twitter.com/zF6D0fVm54

The pair of swings put Papierski all over the College World Series record books. He became the only player in the championship’s history to homer from both sides of the plate in a game, was the first player to have a multi-homer game since TCU’s Bryan Holaday in 2010 and was the first LSU player to do it since Brad Cresse in 1998.

Papierski has gone on a home run binge in Omaha, bashing three of his 11 dingers for the season. His first came in LSU’s opening game against Florida State leading off the fifth inning.