LSU and Texas will meet in college football for the 18th time on Saturday, Sept. 7. The Longhorns lead the all-time series with a record of 9-7-1, having won the last meeting 35-20 in the 2003 Cotton Bowl.

There’s a lot of the line for these two programs currently ranked in the top 10.

Here is everything you need to know about the history between LSU and Texas.

LSU and Texas first squared off on the gridiron in 1896. Coincidentally, the 1896 season was also the first year that LSU used the nickname “Tigers.” Those newly-named Tigers blanked the Longhorns 14-0.

The two schools would face each other 16 more times over the next half century, before a four-decade hiatus began in 1964.

VIEWER’S GUIDE: Top games, rankings, what to watch in Week 2

Forty years to the day of their last meeting, LSU and Texas again headlined the Cotton Bowl. Both teams were stacked with future NFL talent. But it was the Longhorns who had several offensive playmakers at their disposal. And Texas’ star power proved to be the difference in its 35-20 victory.

NEXT LEVEL: Colleges most represented on 2019 NFL rosters

Wideout Roy Williams caught 4 receptions for 142 yards and one touchdown. His lone rushing attempt also resulted in a 39-yard score. Running back Cedric Benson ran for just 46 yards on 12 carries, but his 1-yard touchdown run late in the 2nd quarter gave the Longhorns the lead. They would never relinquish it.

The Tigers ran 29 more plays than the Longhorns did in this low-scoring affair. Jimmy Field’s 22-yard touchdown run in the third was the only end-zone trip made by either team.

Field was one of two LSU quarterbacks to line up under center that day, along with Lynn Amedee. They combined for 133 yards passing yards on 13-of-21 attempts. Those 13 completions set a new Cotton Bowl record. Amedee and Texas guard Johnny Treadwell were each named MVP.

Nov. 16, 1896: During the sport’s infancy, LSU defeats Texas in their first-ever meeting 14-0 | Recap from the Times-Picayune

Details about a 122-year-old college football game are, understandably, scarce.  But a first-hand account of this contest was published in The Times-Picayune the day after LSU’s 14-0 win over Texas.

“It will long be remembered as one the finest games ever played here,” the newspaper reported on Nov. 17, 1896: 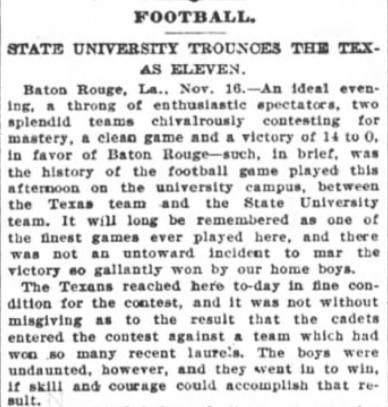 LSU opened the scoring five minutes into the game when a player (referred to as “Gourrier”) “got clear around Texas’ left end, dodged the full-back, and made a touchdown for Louisiana.”

But perhaps the most interesting tidbit is what happened later that night. LSU and Texas took part in a post-game dinner, where the two teams came together “as friends around the banquet board.”

LSU vs. Texas: How to watch

LSU and Texas will play in Austin, Texas on Saturday, Sept. 7, in Week 2. Both teams are ranked in the top 10 of the latest AP poll, with LSU at No. 6 and Texas at No. 9. Below is more tune-in information for Saturday’s game.