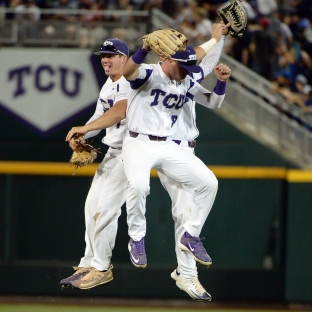 So now we have baseball’s Final Four at the College World Series. Oregon State and Florida are unbeaten, their chances of playing in the championship round looking better by the day. LSU and TCU are on the tight rope, with no net.

Here’s a suggestion for the last two.

Think 2016 as inspiration. TCU probably already has been, anyway.

The parable of last June is that anything was possible and no team was safe, especially the two who went into Friday unbeaten. Oklahoma State and TCU were in the same place then, that Oregon State and Florida are now;  2-0 and looking good. Neither survived the next two days — the first time that had happened in 28 years.

This was Arizona coach Jay Johnson about his Wildcats, after 9-3 and 5-1 wins over Oklahoma State made them 6-0 in elimination games for the month.  “I’d walk down an alley with those guys at two in the morning in the roughest part of the world, and we’re going to come out fine.”

This was Coastal Carolina coach Gary Gilmore after his pack of upstarts beat TCU 4-1 and 7-5. “It’s kind of like I’m in a dream. Dreamt getting to Omaha. I don’t know that I ever dreamt getting to this point.”

Fairy tale or not, it happened. Twice.  It was a big weekend for the losers’ bracket.

“Not an easy thing to do,” Oklahoma State coach Josh Holliday said.

“As disappointed as I’ve ever been leaving this great city,” TCU coach Jim Schlossnagle seconded.

It happened then, why not now?

The possibility should resonate particularly loudly for Schlossnagle and his Horned Frogs, who 12 months ago were on the wrong end of that scenario.

“We know it’s possible. It’s not like it’s an impossible feat. It happened to us,” TCU’s Evan Skoug said. So the experience of last year’s pain can be this year’s gain?

“A hundred percent,” Ryan Merrill said. “I think we know what we’ve got to do to get this thing done.”

The tasks at hand are arduous.

TCU must somehow find some pitches to hit against Florida, whose staff has allowed one run in two games, and shutout the Horned Frogs with 15 strikeouts last Sunday.

LSU must make a 180-degree turn against an Oregon State team that crushed the Tigers by 12 runs four days ago. Questions abound. Will LSU get revenge? Are the 56-4 Beavers even beatable? And what color will Tigers’ leadoff hitter Kramer Robertson have his hair? It was dyed platinum blond for Wednesday’s win over Florida State. Coach Paul Mainieri was not a fan.

“I’m such a fuddy-dud aren’t I?” he said. Maybe he is, maybe he isn’t, but he probably does now own the College World Series record for most uses of the phrase “fuddy-dud,” in a post-victory press conference.

It has taken 10 games, 16 home runs, and a total audience 225,063 to get to this point. Also the exit of Louisville’s Brendan McKay, who left the college stage on which he glittered with one final home run Thursday night. And now only heavyweights still stand in Omaha. Four of the top six national seeds when June began – No. 1 Oregon State, No. 3 Florida, No. 4 LSU, No. 6 TCU. Baseball by the book.

But Friday is when the fickleness of the game can take over. One pitcher can change everything, or one at-bat, or one bounce. The teams who have been in this tight squeeze and somehow found a way understand. Whatever bad happened earlier in the week – LSU’s thrashing, TCU’s hushed bats — can first be forgotten, then overcome

“We have the biggest game of the year on Friday. Let’s Geaux.”- Jared Poche’ pic.twitter.com/vjeSZGigbe

“The best quality our team has is just their presence, their experience, their poise under pressure,” Schlossnagle said. “We know we’re going to play a great team that’s not only talented, but they’re hot. And they’re absolutely loaded on the mound.

“But you’ve got to play the games. It’s never about the best team, it’s only about the team that plays the best.”

Which can be good news, or bad. Depends on which side of fate a team lands.

“That’s why,” Schlossnagle said, “this game is awesome, and that’s why it’s miserable at the same time.”

South Carolina pulled off this elimination denial twice recently, in 2010 and ’12. Here was coach Ray Tanner after the second time:

“You try not to let the game get the best of you, because it does. Baseball is a game that sets you back. It will humble you, it will devastate you, it will crush you, if you allow it to. And we talk about that all the time. There’s bad at-bats, there’s a bad play, there’s a bad pitch. And if you dwell on that, it’s just too hard.

“I think we’ve survived more than anything.”

Survival requires tough minds, hard play, a bit of luck.  Something Arizona’s Louis Boyd said last year after the Wildcats pushed past Oklahoma State. “We play every game as a Super Bowl.”

For LSU and TCU, partners in purple and backs to the wall, this is Super Friday.