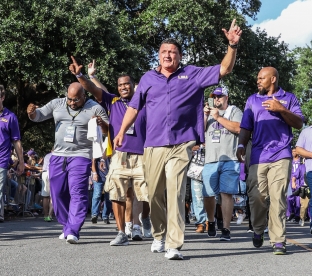 BATON ROUGE, La. — In the Cajun country spanning the bayous, swamps and marshes of south Louisiana, LSU coach Ed Orgeron is known by the nickname “Bebe,” with the French accent aigu above each letter “e.”

When the burley, raspy-voiced Orgeron places a call to someone of his French-speaking mother’s generation, he could start the conversation with, “Comment ca-va. C’est Bebe ici,” which translates to: “How’s it going? It’s ‘Baby’ here.”

LSU rarely has had a coach like Orgeron, who is only the third Louisiana native to lead the Tigers since they joined the Southeastern Conference in 1933.

Orgeron knows a good gumbo is all about the roux, that crawfish boils are a Mother’s Day tradition and how much better everything from a fricassee to a cochon-de-lait seems to taste when LSU wins. It makes Orgeron’s first full season on the job about much more than football.

“It’s a wonderful time in our lives,” said Orgeron’s mother, Cornelia “Coco” Orgeron, who, as the daughter of French-speaking trappers, learned to skin muskrats and trawled for shrimp with her father in her youth. “We can’t wait until the football season starts.”

At home in Larose, sitting near her kitchen window with a view of a shrimp trawler’s outriggers rising from the Bayou Lafourche, she points out that fans everywhere will “see how the Cajuns are really like: loving, giving, hard-working people.”

“If LSU has success and he’s the head coach, then the community where he grew up and the Cajuns will feel like that’s a reflection of them,” said Hebert, now a New Orleans sports radio personality.

LSU is scheduled to open Saturday against BYU in Houston, if the city is able to host the game after Hurricane Harvey.

While the 56-year-old Orgeron projects confidence in his ability to handle one of college football’s high-profile coaching gigs, he concedes that his Cajun heritage made him a more attractive candidate for LSU.

“They want a home boy. They’re proud and they want me to have success,” Orgeron said in his second-floor office in a building named for Arkansas native Charles McClendon, who piled up an LSU-record 137 coaching victories when Orgeron was young.

“Obviously, I understand the pressure of LSU. I understand with a couple of losses that love can turn to unhappiness really fast. The support behind me is sky-high, but we have to win.”

This is the 17th straight season LSU is ranked in the preseason AP poll, the longest active streak by an @SEC team. pic.twitter.com/r4zJN4Ctgo

But football fans in Louisiana seemed inclined to accept Orgeron’s contention that he learned from his Ole Miss misery, and a decade later is better equipped to lead a major program.

“There’s been no question in our minds that he’s the guy we want,” said Dr. Mike Robichaux, who performed Orgeron’s tonsillectomy, and who also was an All-SEC defensive end for LSU in the mid-1960s.

Robichaux marked Orgeron’s ascension at LSU by giving Coco Orgeron a scrap book of articles about her son, along with magazine covers and a poster of Orgeron encased in frames made from Louisiana cypress salvaged from Robichaux’s grandfather’s general store. Robichaux said he delights in the catch phrase: “LSU finally has a coach without an accent.”

Orgeron became a household name in Louisiana as a two-way lineman for South Lafourche’s varsity team. Afterward, he initially signed to play for LSU, but left two weeks into fall camp because of what he’s described as home sickness and immaturity. He later re-joined Hebert at Northwestern State.

Orgeron has long enjoyed a reputation as a strong recruiter and defensive line coach, jobs he held under Miles. And he’s gone 12-4 combined with two bowl victories in recent interim head coaching opportunities at USC in 2013 and LSU last season.

When Orgeron was permanently named head coach after the 2016 regular season, he got choked up thinking of his late father, Ed Sr., as big an LSU fan as he knew.

“I grew up idolizing the Tigers,” Orgeron said. “I worked a lot of places and I liked those places. But I never grew up knowing everything about Miami, everything about Syracuse, everything about USC. As soon as I came here, the first day I got the job, I was nervous as hell. … like I was entering sacred ground.”

“Especially signing here (as a player) and leaving here after two weeks, it was always, in my heart, unfinished business,” Orgeron added.

Robichaux foresees LSU fans being relatively patient with Orgeron, who’s trying to fill a handful of voids left by players who left for the NFL.

“Most people in my neck of the woods say, ‘Que sera, sera,'” Robichaux said. “If he doesn’t win, we’ll be disappointed, but we’re still going to be his fans.”