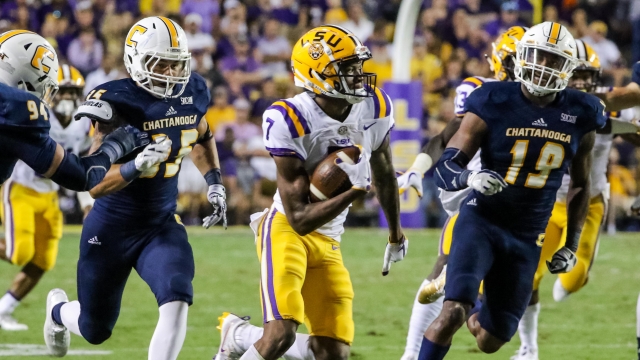 He’s been willing to throw deep — even into double coverage at times — and has been rewarded with big catches by receivers who’ll likely face their toughest challenge yet at Mississippi State this Saturday night.

“We took some shots,” Etling said of LSU’s aggressive approach to the passing attack in the 12th-ranked Tigers’ first two games, lopsided victories over BYU and Chattanooga. “Those receivers went up and made some plays for us. And that was awesome to see and it was awesome to get some young guys involved.”

Five different receivers already have catches of 27 yards or more, the longest being D.J. Chark’s 52-yard reception in the season opener. Chark also had catches of 48 and 46 yards against Chattanooga, including one in which he had multiple defenders around him also trying to make a play on the ball.

RELATED: Oklahoma surges to No. 2 in AP poll | Reaction | Poll by the numbers

Throwing to covered receivers is one thing in a lopsided victory over an unranked, non-conference opponent at home. It could be a different story entirely in a Southeastern Conference opener on the road against a Bulldogs squad that also is off to a solid 2-0 start against non-league competition. But Chark doesn’t want to discourage Etling from staying aggressive.

“A lot of time we criticize Danny for not being aggressive enough and Danny came out there and was aggressive and we made him right,” Chark said. “So I don’t care who we play; if Danny gives us that shot, we’ve got to go get it.”

“The more that we show what we can do, the more comfortable everybody is with it,” Chark said. “It still depends on what the defense gives us, if the defense allows us to go deep. But if they don’t, then we’re OK with that. We’re going to block our guy.”

LSU has been a run-first team for most of the past decade. While Leonard Fournette has left for the NFL’s Jacksonville Jaguars, junior Derrius Guice, a ferocious runner who shined when Fournette was injured last season, has stepped in and is backed up by senior Darrel Williams.

But LSU has a new offensive coordinator in Matt Canada, who doesn’t want to abandon what LSU does well, but wants to make LSU less predictable by improving passing options.

“We’re just getting the chance, you know? Coach Canada comes in and tells us we’re going to run the ball, that’s our DNA, but as receivers we have to step up and make plays,” Chark said. “There’s a lot of doubters … but we really stick together and we just focus on us.

“When Saturday comes, everybody’s confident and coach gives us a chance to go make some plays,” he added.

Coach Ed Orgeron said the addition of receiving consultant Jerry Sullivan to the coaching staff also has helped, particularly with receivers’ “footwork and the way they run the routes and the timing between them and Danny.”

“Plus,” Orgeron added, “they’re catching every ball we’re throwing them.”

Etling’s confidence in his receivers — which was not evident during a miserable, unproductive spring game for the passing offense — seems to be growing now as well.

“They’re going to keep getting better. It’ll be a bigger test this week and we’re going to challenge them,” Etling said. “We’re going to need them to do that throughout the season, especially this week against a top-quality defense and a tough opponent in Mississippi State.”