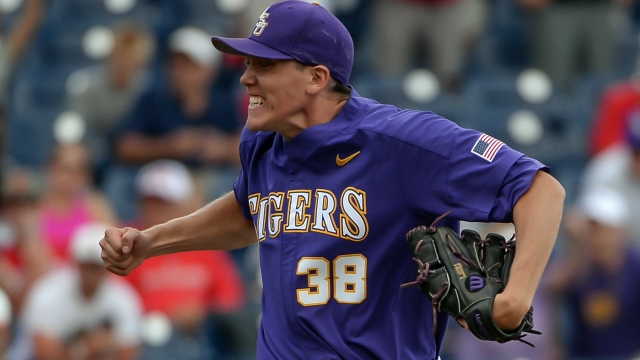 OMAHA, Neb. — His teammates call him “Psycho.” His coach calls him a “cool customer.”

Armed with a high 90s fastball with movement — he reached 98 on the radar gun against Florida State last Wednesday — a demonstrative personality and complete fearlessness on the mound, Hess has emerged from a midweek starter to a shutdown closer in a blink of an eye in his true freshman season.

“I like to call it controlled aggression. You’re being aggressive and you’re being intense, but you’re not letting it get to a point where you’re getting outside of your body,” Hess said about his demeanor. “You’re staying within yourself, you’re getting the job done, but at the same time, you’re letting out your emotion.

“It is a fine line, but for me, that’s my way of competing.”

Hess started the season as a back-of-the-rotation starter for LSU. But after setup man Doug Norman tore his UCL and underwent Tommy John surgery and closer Hunter Newman’s back flared up, forcing him to miss a few weeks, coach Paul Mainieri called Hess into his office with a proposition.

“[Mainieri said], ‘Hey, you’ve been our midweek guy but with a couple of injuries, we think we’re going to have to move you to the bullpen,” Hess said. “It was great, I’ve really enjoyed it and it’s been an awesome experience getting to finish off these games for sure.”

Since the midseason move, Hess has pitched to a sub-2.00 ERA with 49 strikeouts in 30 innings. In this College World Series, the right-handed fireballer has tossed 4.2 scoreless innings with 10 strikeouts and has allowed only four base runners.

“That was probably the best move coach has ever made, putting him in the bullpen,” LSU senior starter Jared Poche’ said. “He’s come out and just set the tone. He’s finished off some big games and has made some really, really good hitters look not good at all.”

Hess started the year as a midweek starter before switching roles.

Hess has embraced a closer’s mentality with his unmatched intensity and animation on the hill, which isn’t anything like his mild-mannered persona off the diamond.

But at this time of the year, with 20,000 eyeballs focused on him inside TD Ameritrade Park and thousands more from home from their TV sets, “Psycho” Hess is who college baseball fans have become familiar with.

And Hess hasn’t shied away from that attention as LSU’s new “Wild Thing.”

Following LSU’s 13-1 loss to Oregon State on Monday, the Tigers tried a “team-bonding exercise” where a group of players decided to try out some new hair styles. Hess went with a classic look made famous by Charlie Sheen’s fictional character Rick “Wild Thing” Vaughn from the movie “Major League,” a young pitcher with an electric fastball and unhinged personality. Sound familiar?

“Since my team nickname was ‘Psycho,’ I figured, you know what, Rick Vaughn was a pretty big psycho in ‘Major League,’ so I felt like that’d be fitting for me. And here we are,” said Hess, showing off his jet black-dyed hair with a zig zag pattern in the back.

MORE: For teams with early Omaha exits, CWS is bittersweet

It didn’t take long for the TD Ameritrade Park PA system to pick up on the new haircut, as it blared The Troggs’ song “Wild Thing” as Hess took the mound Saturday.

Hess’ “Wild Thing” persona may not be complete yet either. According to LSU baseball strength coach Travis Roy, another key component of Vaughn’s signature style may be on its way to the Tigers dugout soon.

Roy said he was contacted by a former LSU intern who now works in Hollywood and had been in communication with actor Tony Todd, who’s worked with Sheen on past projects. Word got around to Sheen about Hess’ inspired look, and the original eyeglasses that his “Wild Thing” character wore on the mound in the film may be en route to the Tigers’ hotel this week, according to Roy.

“The person who worked at LSU texted me and was like, ‘Hey, I’ve got something for you,” Roy said on Sunday. “He’s supposedly going to send [the glasses]. Will it happen? I don’t know. But hey, it’d be pretty cool.”

Eyeglasses on hand or not, Hess’ heavy workload is far from over as LSU prepares for Florida in the CWS finals.