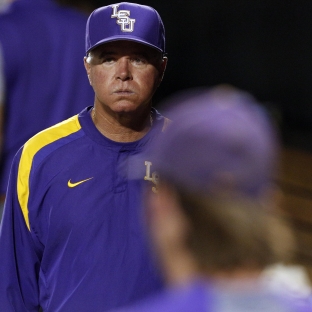 Losing a national championship is always a tough pill to swallow. Getting as close as LSU did to the baseball title — a CWS Finals appearance against Florida — and falling short can be a painfully haunting experience.

That much is common. Being able to speak eloquently on what the moment means to you and your team in the aftermath of that loss? That’s much rarer.

But that’s exactly what LSU coach Paul Mainieri did Tuesday night after Florida won the national title with a 6-1 victory over his Tigers.

In addition to speaking on how bittersweet a baseball postseason can be, Mainieri talked about the pain that Baton Rogue has felt in the past year, and how he had hoped that — in some small way — a baseball championship could help.

Here’s a transcript of that speech:

“I remember my wife saying to me last summer, she said, “Man, wouldn’t it be great if you could go out and win the national championship this spring to unify the community and give them something to be happy about and be proud of?” And I’ve never — I never forgot that she said that.

“I don’t really talk about it that much with the players, but in my heart was something we really wanted to do. And even though we came up a little bit short, two victories short, I think we did a lot of things this year to make the people in our community proud and our state proud.

“But I know these players to my right and all the players in that clubhouse gave it everything that they had. And I don’t think they have anything to be ashamed of. And I hope that the people of Louisiana and in Baton Rouge, New Orleans, et cetera, are proud of our team.

“Everybody else lost two games in their last tournament or series or weekend, whatever it is, and it’s an awful feeling, whether it happens in the Regional, Super Regional or in Omaha. It’s an awful feeling to come up a little bit short.

“But that doesn’t mean we’re not proud, and I’m really proud of our team, especially the guys like these two guys who won’t be with us as we go forward, two four- year seniors who gave everything in their heart to LSU.

“So, again, we came up a little short, but we’re very, very proud.”