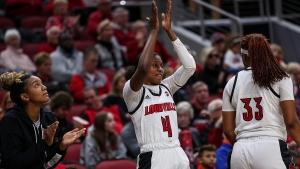 
In a Thanksgiving week that saw plenty of upheaval in the women’s hoops ranks, including the Nos. 1 and 2 teams losing on the same day, the Louisville Cardinals stood out.

Louisville moved up six spots to the overall No. 2 national ranking in the latest Associated Press Top 25 poll after the Cardinals improved 8-0 on the season with Paradise Jam wins last week over UT Arlington, Oklahoma State and No. 1 Oregon.

The 72-62 victory over Oregon on Saturday was the capper to an undefeated November for Louisville, which started the season unsure of its 2019-20 season prospects following the departure of All-American guard Asia Durr following last season. Behind an inspired defensive effort and Kylee Shook’s 18-point, 15-rebound performance, Louisville snapped a five-game losing streak against top-ranked teams and issued notice of its contender status.

The Cardinals held Oregon standout Sabrina Ionescu to 13 points on 6-of-20 shooting from the floor. Dana Evans backed Shook with 17 points of her own, while Elizabeth Balogun had 11 points and Jazmine Jones, 10 for the Cardinals who claimed the tournament’s Island Division title.  The Ducks led by as many as 11 points early before Louisville took control late in the second quarter and never trailed after, leading 37-32 at halftime. Louisville stretched its lead to as many as 12 points in the third quarter, going up 44-32 on Noriko Konno’s jumper with 7:32 left, and were ahead 51-42 heading into the final period.  Oregon  managed to close within six points twice, the last at 66-60 on Ionescu’s 3-pointer with 1:32 left, but Evans and Jones combined to make six free throws to give Louisville some breathing room down the stretch.

POWER 10: Stanford rises to No. 1 in Power 10 after a weekend of shakeups

Louisville opened Paradise Jam play with a 76-67 hard-fought victory over previously undefeated UT Arlington on Thanksgiving. Jones led the way with 24 points, while Evans added 19 points and Balogun had 12 for the Cardinals.  Louisville saw the Lady Mavericks fight back from a 16-point deficit in the fourth quarter to cut the lead to five before the Cardinals held on for the victory.

Evans scored a career-high 28 points as Louisville pulled away in the second half to beat Oklahoma State 69-48 on Friday at the Paradise Jam. Balogun added 12 points and 10 rebounds for the Cardinals, who held Oklahoma State to 25 percent shooting from the floor.

Featuring a lineup with four players (Evans, Jones, Shook and Balogun) currently averaging double figures, Louisville has been especially fierce on the defensive end through the first eight games, holding opponents to 35.4 percent shooting from the field and 56.9 points per game, a scoring differential of 173 total points.

Louisville returns to action on Thursday when it plays at Ohio State.