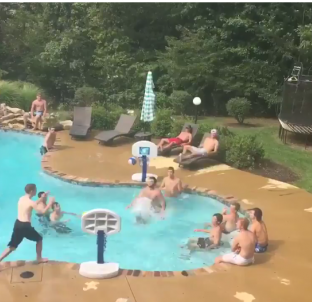 The Cardinals are skilled on the diamond, but their pool basketball games appear to be up to snuff, too. Watch as the players – with 11 passes in between – touch the ball before one lucky team member slams it home. Yes, collective arm strength played a key role in making this possible:

Anyone want to take a stab at how to score this GEM?!!!