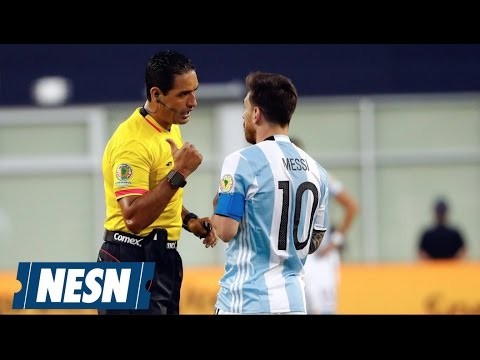 Argentina just received what could be a big blow to their World Cup aspirations as football megastar Lionel Messi has been levied a four-match ban. FIFA handed out the suspension Tuesday morning before Argentina’s game against Bolivia.

As reported by Boston.com, Lionel Messi was suspended for “having directed insulting words at an assistant referee” during a home qualifier against Chile last week. The first of the four-game suspension was Tuesday’s game against Bolivia, which Argentina lost 0-2.

Argentina’s reliance on Lionel Messi cannot be overstated. As pointed out by ESPN, Messi has played in six matches in Argentina’s World Cup qualification campaign. The team has been 5-1 in those games. In contrast, in their eight games without Messi, they have only one win to show for, to go along with three losses and four draws.

“We have to appeal this decision, we’ll see how it goes,” said Argentina’s national team director Jorge Miadosqui, who also expressed both anger and sadness with Lionel Messi’s ban. Argentina’s next matches are against Uruguay on Aug. 31, and two home games against Venezuela (Sept. 5) and Pero (Oct. 5).

“The decision is in line with the FIFA Disciplinary Committee’s previous rulings in similar cases,” FIFA said, which also meted Lionel Messi a $10,000 fine. As noted by the Boston.com report, Messi and the Argentine soccer federation can challenge the ban at FIFA’s appeals committee, although the committee has not had a history of overturning many disciplinary rulings. It seems like Argentina’s only hope is to have the suspension reduced.

Lionel Messi’s ban come in the midst of the turmoil facing the Argentina soccer federation. As pointed out by Boston.com, FIFA appointed an emergency committee to run the federation following its previous leaders’ implication in a corruption case. They are set to have an election this week.