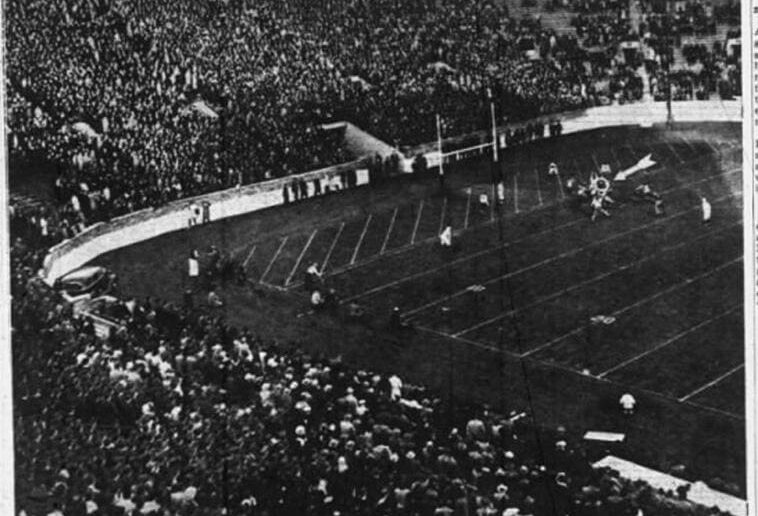 Like 2020, college football was very different during World War II


The 2020 college football season is highly unusual because of the COVID-19 pandemic. There are schedule changes, schools opting not to play and an overall sense of uncertainty. Heck, even Notre Dame is playing a conference schedule.

But it’s not the first time a season has strayed from the norm. Although the circumstances were vastly different from today, the sport forged on during another global crisis in the early 1940s.

The United States officially entered World War II on Dec. 8, 1941. By August 1942, 52 colleges had dropped football as a result of the war, according to Harold Claassen of the Associated Press.

Notable programs included NYU, Gonzaga, Centenary (La.) and St. Mary’s (Texas). Claassen reported that a majority of the 52 were “institutions away from densely populated areas and relying for profit on spectators who lived at a distance.”

For Gonzaga, Centenary (La.) and St. Mary’s (Texas), the discontinuation of football was permanent. None of those schools have fielded a team since.

Most colleges, in some capacity, did participate in the 1942 season. But they weren’t alone.

Service teams such as Great Lakes Navy, Iowa Pre-Flight and Georgia Pre-Flight competed against the Michigans, Iowas and Auburns of the college football world.

To be clear, these “service teams” were not service academies like Army or Navy. Rather, they represented military camps and pre-flight schools across the country — some of which were located on college campuses.

The University of North Carolina at Chapel Hill was home to North Carolina Pre-Flight, of course. But the Cloudbusters, as they were known, were a separate team from the university’s Tar Heels.

Their squad consisted of “naval aviation candidates” who were on campus to complete their pre-flight training, according to Jack Cuddy of United Press International.

Cuddy also reported that the Cloudbusters’ roster would be flexible throughout the season. Head coach Jim Crowley was quoted saying, “I don’t know who will make the team, or how long they’ll be with us.”

Crowley’s players were also limited in size and stature. The Navy did not accept recruits who were taller than 6-3 or heavier than 200 pounds, according to Cuddy. However, these cadets endured a 12-hour training program every day.

PERFECTION: Every undefeated team to win the national championship since 1936

Along with the constant roster fluctuation, the makeup of these service teams included former college and professional football players.

The Bainbridge Commodores, who represented the naval training station in Bainbridge, Md., were stacked with ex-NFL talent, according to John F. Chandler of the Associated Press. Some of the more notable players were tackle Clure Mosher (Pittsburgh Steelers), guard Len Akin (Chicago Bears) and end Howard Hickey (Detroit Lions).

Commodores’ running back Bill DeCorrevont had previously been a star at Northwestern. After his stint with Bainbridge, he would go on to play in the NFL and win a championship with the Chicago Cardinals in 1947.

More schools would suspend college football in 1943. But this time, it wasn’t just the smaller programs.

Powerhouses like Auburn, Mississippi, Mississippi State, Tennessee, Vanderbilt, Virginia Tech and William & Mary were shuttered, according to Romney Wheeler of the Associated Press. Alabama, Michigan State and Stanford, to name a few, also withdrew from the 1943 season.

Chip Royal of the Associated Press estimated that only 75 percent of all college football teams in America would actually play in 1943.

POLLS PRIMER: Every college football poll explained and how they work

Another wrinkle to the 1943 campaign was that service teams were now eligible for votes in the Associated Press poll. The AP poll consisted of 20 teams back then, as opposed to today’s top 25.

Five service teams were ranked in the final poll of 1943 (not including Army and Navy). Here’s a look at those rankings, with the five teams highlighted in bold.

The Iowa Pre-Flight Seahawks finished second behind Notre Dame. It’s the highest ranking a service team has ever received in the final AP poll.

Their only blemish was a 14-13 loss to those same Fighting Irish in a game where the stakes couldn’t have been higher. Not only did both teams enter with 8-0 records, but the Irish and Seahawks were ranked No. 1 and No. 2, respectively.

A No. 1 vs. No. 2 regular-season matchup is a rarity in college football. According to Bill Bender of Sporting News, it’s happened just 24 times in the AP poll era.

A crowd of 45,000 were on hand at Notre Dame Stadium that afternoon, according to Jim Costin of The South Bend Tribune. Those who were there “left the stadium suffering from hysteria; with a bad case of the jitters thrown in,” reported Costin.

Iowa Pre-Flight drew first blood and led 7-0 at the half. But the Irish responded with a touchdown on the opening drive of the third quarter.

Tied 7-7, the Seahawks recovered a Notre Dame fumble and needed just one play on offense to find the end zone. Despite regaining the lead, kicker Bernie McGarry’s point-after attempt struck the right upright. They settled for a 13-7 advantage.

Iowa Pre-Flight had its chances down the stretch, but the Seahawks missed a go-ahead field goal and failed to capitalize on a fumble recovery in the final minutes.

Newspapers.com
A view of Fred Earley’s successful point-after attempt. The arrow is pointing to the football, which is inside the circle, just after it left Earley’s foot. This picture was published in The South Bend Tribune on Nov. 21, 1943.

A week later, Notre Dame suffered a 19-14 loss to Great Lakes Navy in the season finale. Iowa Pre-Flight cruised to a 32-0 victory over Minnesota in its final game.

Once again, the Irish and Seahawks had identical records. But Notre Dame held on to the No. 1 ranking, and with it came the 1943 national championship.

REAL-LIFE RUDYS: 14 of the best walk-ons in college football history

While no service team during World War II would finish higher than the 1943 Seahawks, a record number were ranked in the final AP poll of 1944. Ten service teams (again, not including Army and Navy) made the cut.

Considering Army has claim to the 1944 national championship, it was truly a season dominated by the Armed Forces. That will, likely, never happen again.

Below is a look at the final AP poll for the 1944 season. Service teams are highlighted in bold.

World War II officially ended on Sept. 2, 1945. A few days earlier, Newspaper Enterprise Association (NEA) sports editor Harry Grayson had this to say about the upcoming season: “This will be best college football season since 1942, but the general renaissance on campuses will not come about until 1946.”

Grayson also reported that “coaches suspect it may be 1947 before teams are equally manned, and competition returns to its former level.”

But the end of the war also meant the end for many service teams.

The Skycrackers of Georgia Pre-Flight were one of the first dominos to fall. Their 1945 season was canceled on Aug. 28 of that year, according to F.M. Williams of The Atlanta Constitution.

Commander Madison Bell, who was also the athletic director, was quoted saying, “We had planned to form a football team composed entirely of cadets, but due to the expected cutback in the training program here, we do not believe we would have enough available material to play all our games.”

Iowa Pre-Flight’s 1945 season was nixed on Sept. 1, according to the Iowa City Press-Citizen. The report cited the “voluntary withdrawals of air cadets from training and a probable reduction in naval aviation training” as reason for the cancelation. North Carolina Pre-Flight met the same fate, according to the report.

One of the four pre-flight schools did manage to play during the 1945 season. The San Francisco Examiner reported on Aug. 5 that Saint Mary’s Pre-Flight had planned a nine-game schedule.

The Air Devils would complete that schedule, which concluded with a 6-0 loss to California on Dec. 1, 1945.

In his recap of the finale, Emmons Byrne of the Oakland Tribune wrote, “It was, in all probability, the final game between the Bears and the Air Devils, who were spawned by the war. Next year, St. Mary’s Pre-Flight will be only a memory.”

On Dec. 27, 1945, Navy Commander J.E. Dougherty was quoted in an Associated Press report saying, “We intend to continue football and other forms of athletics at Ottumwa and St. Mary’s on the same basis as during wartime, except that some retrenchment will be effected.”

Despite Dougherty’s comments, there is no record of Saint Mary’s Pre-Flight ever playing a football game again. Byrne was right.

Aside from newspaper archives, little information exists on the service teams that competed during World War II. There are no all-time rosters, record books or complete statistics. Even the mighty Iowa Pre-Flight Seahawks have largely been forgotten.