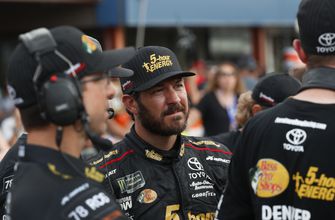 LAS VEGAS (AP) — Martin Truex Jr. could have been down this week while he prepared for the start of the NASCAR playoffs. After all, his race team is going out of business soon, and nobody has confirmed where he’ll drive next year.

Instead, the defending Cup series champion was excited as he returned to Las Vegas. Furniture Row Racing’s days are definitively numbered, but he wants the entire crew to seize the opportunity to go out with a once-in-a-lifetime bang.

“I feel like we’re in a great place,” Truex said. “We definitely want to repeat, no question about it.”

The 10 playoff races to end the NASCAR season are also a long farewell for Furniture Row, the plucky underdogs who somehow won it all last year. Owner Barney Visser is closing up shop — but not before Truex gets a shot at repeating his 2017 achievement, starting Sunday at Las Vegas Motor Speedway.

Truex knows that the only thing more improbable than last year’s championship run by a one-car team from Colorado would be a second title under even more difficult circumstances.

“I think you could take it one of two ways,” Truex said. “You could hang your head down and say, ‘This sucks. Why are we in this position?’ and get mad at the world, or you can look at each other and say, ‘Let’s go do this.’ I think all of us, we look at that and say, ‘Hell yeah. Let’s go do this. Let’s send Barney out on top and let’s give him the best going-away gift that we ever could.’”

Truex is gunning for the first repeat Cup championship run since Jimmie Johnson got his fifth straight in 2010. Truex and crew chief Cole Pearn have a genuine chance to pull it off: Their car has been in a three-man derby with Kyle Busch and Kevin Harvick atop the standings for most of the season, with Truex winning four races and posting 15 top-5 finishes.

But it’s all bittersweet as one of the most incredible success stories in recent motorsports history comes to an end this winter with the end of Furniture Row. The Rocky Mountain team created as a self-described hobby by Visser stunningly became NASCAR’s best last season, with Truex winning eight races and snatching the title from the giants of the sport.

But earlier this month, Visser announced his decision to shut down Furniture Row due to a combination of financial constraints and a desire to spend more time enjoying life.

“It takes so much to keep these race teams going,” Truex said. “Especially a small team like ours, with the way we were having to do things, it was a high stress level, I would say.”

Although the team is taking small steps toward its end, such as discontinuing shop tours in Denver this week, Truex said he isn’t worried about any key employees taking other jobs during the playoff stretch. He also expects Visser to spend whatever is necessary to make sure they can compete until the end.

Joe Gibbs Racing is the most popular pick in the paddock to be the next team for Truex and Pearn. Almost everyone expects Truex to get the No. 19 Toyota currently piloted by Daniel Suarez.

JGR had an alliance with Furniture Row for the past three seasons, making Pearn and Truex quite familiar with their potential destination. If it happens, Truex will be teammates with Busch, the only JGR driver who has been able to keep up with him for two years.

Truex isn’t saying anything concrete about his future, but also claims he doesn’t think about it much.

“Only maybe on Tuesday or Wednesday,” he said. “Monday, you’re winding down from that race the day before and figuring out what could we have done better, and then Thursday your focus turns to the next one. That stuff is weekday stuff.”

Truex has plenty of experience with moving: He suited up for four teams and won only three races in the first 12 years of his Cup Series career, enduring a 218-race winless streak between 2007 and 2013.

He won one race in his first two seasons after joining Furniture Row in 2014, but the team took off one year later when Pearn was promoted to crew chief.

“I’ve had a lot of practice, there’s no question,” Truex said with a laugh. “I’ve been tested a lot, and had to go through adversity quite a bit, but that’s life. How you get through those things is how you show what you’re made of.”