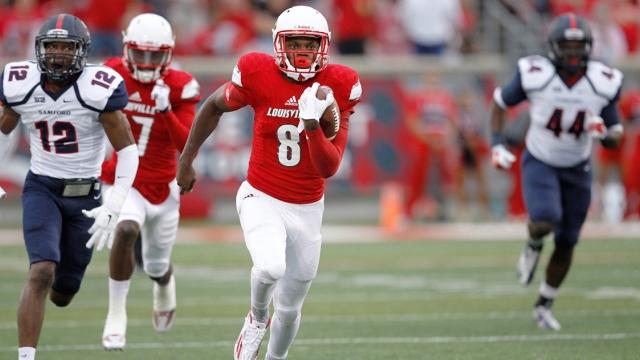 
2019 NFL MVP Lamar Jackson won the highest individual honors in college football and the NFL in the span of four seasons, after having won the Heisman Trophy in 2016. Jackson was one of the most electrifying players in recent memory, if not in the history of the sport.

The vitals on Lamar Jackson

Here are Lamar Jackson’s career stats at Louisville. Scroll to the right to view the complete stats.

Where did Lamar Jackson go to college?

Lamar Jackson attended Louisville, which he chose over scholarship offers from Florida, Mississippi State and Nebraska.

What kind of prospect was Lamar Jackson in high school?

Jackson was ranked the No. 409 prospect in the 2015 recruiting class, according to the 247Sports Composite rankings, including the No. 12 dual-threat quarterback and No. 60 prospect in Florida.

What was Lamar Jackson’s record in college?

Lamar Jackson’s Cardinals went 24-14, including a 9-3 regular season in 2016, followed by an 8-4 campaign in 2017. Louisville made a bowl game in each of Jackson’s three seasons playing for the Cardinals.

Lamar Jackson’s name appears in the FBS record book 19 times, frequently in statistical categories that involve his explosive dual-threat ability as a passer and runner.

Here are the FBS records and rankings held by Jackson.

What were some of Lamar Jackson’s best games in college?

In Jackson’s first college game, he completed 9-of-20 passes for 100 yards and an interception. He ran for more yards than he threw for, with 106 rushing yards and a touchdown on 16 attempts. He had five games with at least 100 rushing yards in 12 games as a freshman, capped off by a 227-passing yards, 226-rushing yard, four-total touchdown performance against Texas A&M in the Music City Bowl. His first big passing game came on the road against Florida State, where he threw for 307 yards and three touchdowns in a loss.

Jackson built on his Music City Bowl success with a Heisman Trophy-winning campaign in 2016, which started with eight total touchdowns against Charlotte in Louisville’s season-opener. He completed 17-of-23 passes for 286 yards and six touchdowns, with 119 rushing yards and two more touchdowns on the ground.

After throwing for 361 yards and four touchdowns in a road win against Virginia, Jackson faced Boston College on the road, where he completed 12-of-17 attempts for 231 yards, four touchdowns and one interception, plus 185 rushing yards and three rushing touchdowns.

What awards and honors did Lamar Jackson win in college?

What did people say about Lamar Jackson?

The Courier-Journal (Sept. 2015): “Louisville freshman wideout Jaylen Smith calls his roommate, ‘the most exciting quarterback in college football right now.’ He says Jackson can throw the ball 85 yards ‘easy’ and with velocity that requires constant readiness from his receivers. Yet it is speed and acceleration that make Lamar Jackson special. Already an urban legend for beating NBA star Rajon Rondo in an informal sprint, Jackson enhanced his reputation for making tracks with both planned and improvised runs against Auburn.”

Former Louisville coach Bobby Petrino (Sept. 2015): “We always have a sideline test in recruiting. A running back, receiver or quarterback (is) running the ball and they get to the sideline and they get cornered by two or three guys. Does he get hit, knocked down, or is he a guy that slips past them and stays up? There a lot of times you look at how hard does the guy get hit, how big (of) hits do they take? Lamar ran the ball a number of times (16) and didn’t really get hit that hard any time he ran it.”

Tim Sullivan of The Courier-Journal (Sept. 2015): “When Lamar Jackson scored his second touchdown Saturday night, it was from a distance of 13 yards and with a cutback burst designed to break hearts, wills and ankles. Louisville’s freshman quarterback has a gear Samford doesn’t often see and the maneuverability to match. He ran for 184 yards and two touchdowns in U of L’s 45-3 stampede Saturday night, sharing time and yet separating himself, bringing clarity to Bobby Petrino’s muddled quarterback question and relief to Cardinal fans who were beginning to wonder what it felt like to win.”

Tallahassee Democrat (Oct. 2015): “The true freshman is arguably the fastest quarterback in the country, with a 73-yard run to his credit already this season. His longest pass of the season is 36 yards.”

The Courier-Journal (Sept. 2016): “Louisville quarterback Lamar Jackson’s breakout onto the national college football scene will reach another level of fame and visibility this week – that of Sports Illustrated cover boy. Jackson, the early Heisman Trophy favorite who led U of L to a 63-20 blowout of Florida State, will be on the cover of the venerable sports magazine with an accompanying store from college football writer Andy Staples. He’s the first U of L football player ever to be on the SI cover.”

Jeff Greer of The Courier-Journal (Oct. 2016): “For so much of the second half in Saturday’s thrilling Clemson-Louisville showdown, Lamar Jackson looked like he was having his ‘Heisman Moment,’ the stretch of electrifying, sensational play that defines a player’s standout season in his team’s standout victory. Jackson, U of L’s shifty quarterback who accounted for 457 yards of offense and three touchdowns, was everywhere in the Cards’ frenetic comeback in Death Valley. His 300-plus second-half yards helped engineer Louisville’s rally from a 28-10 deficit, with his 11-yard touchdown giving U of L (4-1) an eight-point lead with 7:52 to play.”

Ralph Russo of the Associated Press (Oct. 2016): “After one month there is only one question when it comes to the Heisman Trophy: Can anybody catch Louisville quarterback Lamar Jackson in the race to college football’s most prestigious player of the year award? With enough games in the books and a clear picture of the field emerging, the AP begins its Heisman Watch with Jackson holding a commanding lead.”

Kentucky’s Jordan Jones (Nov. 2016): “We weren’t playing Louisville today. We were playing Lamar Jackson. You shut him down, you shut down the team.”

Steve Jones of The Courier-Journal (Dec. 2016): “Lamar Jackson, welcome officially to legendary status. The University of Louisville sophomore quarterback won the Heisman Trophy on Saturday night as the nation’s most outstanding college football player and earned permanent inclusion into the pantheon of the sport. Wearing a red blazer and black bow tie to match his school colors, Jackson accepted the iconic bronze statue during a ceremony at the Playstation Theater in Times Square, becoming U of L’s first Heisman winner.”