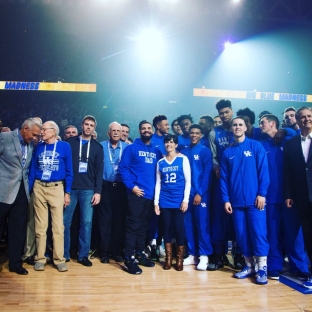 The tradition of Midnight Madness is one that’s mainstream across the nation at every level of college hoops. But then there’s the way Kentucky handles its Big Blue Madness.

Like many other programs, the Wildcats have player introductions, scrimmages and musical performances, but none quite live up to the hype and expectation of the production of the annual event at Rupp Arena every year. Besides, who else can say they have a VIP blue carpet event leading into the main attraction?

Come take a walk with us and into #BBM17 on the VIP blue carpet. #EmbraceMadness #EmbraceTheStage pic.twitter.com/y384EPO94Q

RELATED: 5 SEC games that you need to watch this year

Kentucky fans rushed to their spots in line and camped out three days before tickets were released a few weeks ago in order to secure spots for one of Lexington’s biggest events of the year.

After each individual player was announced Saturday night — and showcased their own personal dance moves — Wildcats coach John Calipari gave his annual state of the program address where he complimented and acknowledged Big Blue Nation for their support every year. He then described how this year’s squad is poised for success through hard work and dedication.

Who danced best at #BBM17? pic.twitter.com/eLIwqGVnp3

Following Calipari’s speech, he introduced a familiar friend to the program as rapper Drake made an appearance, putting on a show for Kentucky fans.

The event ended with an intrasquad scrimmage between members of the 2017-18 Wildcats.