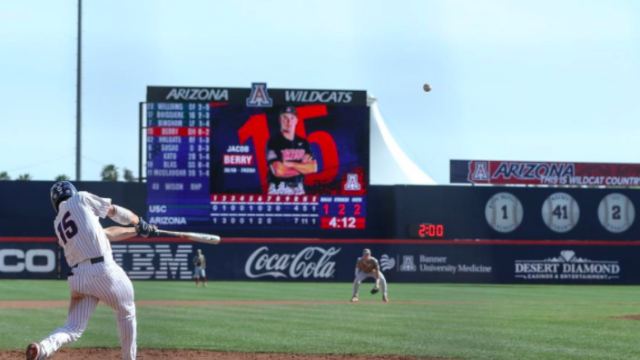 This season, like any in college baseball, is full of impressive debuts from freshmen across the nation. The 2021 season has the added caveat of what has become known as the “COVID freshmen”, a slew of freshmen that barely got to play in 2020. When trying to break down the best freshmen in college baseball, there was plenty from which to choose.

So, we turned our focus to those freshmen that are making the biggest contributions to their teams, the most impactful freshmen if you will. With the odd pandemic times and classifications, to qualify for this list, we only considered those players listed as freshmen on NCAA.org, the official site of the NCAA or per team confirmation of academic year.

The Wildcats haven’t reached the NCAA tournament since 2017. They finished 32-24 in 2019. Now, Arizona is 35-15 with two weeks left, and thanks to its dynamic freshmen duo, the Wildcats have one of the scariest lineups in college baseball.

BOMBS AWAY: 7 lineups you should be watching

Berry was one of the top-ranked high school prospects in Arizona and very much on the national stage prior to coming to Tucson. He went 6-for-14 at the Frisco Classic in March to earn All-Tournament team honors and has yet to relent. Berry, a slick switch-hitter who makes solid contact from the left side while bombing away from the right, leads the Wildcats with a .392 average, a 1.217 OPS, 13 home runs and 58 RBIs. He has a simple approach and swing and can mirror it on both sides of the plate, giving pitchers no advantage against him.

Susac had the honor of replacing Austin Wells — the New York Yankees 2020 first-round draft pick — behind the plate. Offensively, he hasn’t skipped a beat, hitting .359 with a 1.073 OPS, 12 home runs and 57 RBIs to go along with a team-high 18 doubles. He’s been equally impressive behind the plate throwing out 50 percent of attempted base thieves while improving on his receiving and framing all season long.

First, take a look at these stats: Wright State leads college baseball with a .341 batting average, a 1.021 OPS, an absurd 10.5 runs per game, and 2.7 doubles per game. Sass and Sayre have been a large reason for those numbers.

Sass’s overall stats are great: he’s hitting .385 with eight home runs and 27 RBI. But he has really found his groove over the past 15 games, with 27 hits over that span, including seven multi-hit games. With Konner Piotto gunning down 35 percent of base runners, Sass has comfortably shifted to more of a DH role and is embracing it.

Sayre, who is listed as a pitcher as well, has been the driving force behind Wright State’s top offense. He leads the team with a .422 average and 1.252 OPS. He’s also belted eight home runs and driven in 39 runs while going a perfect 6-for-6 in stolen bases. Something you must like watching in a freshman is plate discipline, and Sayre has a sound approach, walking more than he has struck out to help bolster a .500 on-base percentage.

Let’s head back to out the desert, where Long has been hotter than a Phoenix summer. Since April 20, Long has blasted 15 home runs in 16 games, while driving in 36 runs over that span. Arizona State is 11-5 during that same run, so the impact is evident.

DON’T MISS AN AT BAT: 11 of college baseball’s hottest hitters

Long began the season splitting time in the bullpen. He was pretty darn impressive as well, recording four saves and not allowing a run in six appearances behind a fastball that sat in the 90s. But he left the pen in March and has been a different player since becoming a full-time hitter. He’s now hitting .385 with a 1.279 OPS to go along with those 16 home runs and 52 RBIs. Oh, and his .838 slugging percentage is tops in the division. The college baseball season is a grind, and Long has clearly made adjustments and settled in, and paired with his natural strength, that raw power isn’t so raw anymore.

Skenes is huge, standing at 6’6, making him an imposing presence on the mound and a big target behind the plate. Air Force was 26-26 in 2019 and 7-10 when play stopped last year, so Skenes’ towering persona has been a major force in the Falcons 24-18 record thus far.

In early March, Skenes blasted a home run that was measured at 455 feet with a 109 mph exit velocity. He was also clocked with a low-90s fastball heading into the season, well above the class of 2020 average of 82 according to Perfect Game. Simply put, Skenes is talented wherever you put him.

To be fair, Campbell has done most of his damage on the bump this season, but there’s no doubt the 6’7 freshman can hit. He can also no-hit, as he did on May 8 against Kansas.

Campbell was dazzling in his no-hitter, the first solo, nine-inning no-no for Oklahoma State since 1968. He struck out 11 and walked one… and only needed 99 pitches to pull it off. The very next game, he threw eight innings of one-run ball, striking out 10, improving to 6-1 with a 2.25 ERA and 1.06 WHIP.

As for the bat, he came out blazing in 2020, hitting .414 before play came to a halt. The results haven’t been the same this year, but he’s still hitting .250 and the hit tool is there. So much so that he was added to the John Olerud Award watchlist for the best two-way player in the nation in April.

Just how good is Grice? Friend of NCAA.com Aaron Fitt picked the two-way star as his freshman of the year. Fitt’s assessment was that for such a big player — he stands at 6’6 — Grice has a surprisingly good feel for hitting and is not an easy out.

Grice has definitely been bat strong in 2021. The left-hander was on the MLB Draft radar out of high school, with several scouts noting his 80-grade power, the highest grade possible on scouting grading scales. He leads Clemson in home runs with 13 and is second on the team with nine doubles but is also hitting .317 with a 1.043 OPS and a team-high 49 RBI and 47 runs scored.

Now on the bump, he’s struggled to adjust and is clearly focused on hitting. Still, Grice had a low-90s fastball out of high school, and when scouts rave about your changeup at a young age, you have someone special. But for now, Grice’s strength is at the plate, most recently taking home National and ACC player of the week honors with a four-home run, 12-RBI week. It was his second tie winning the ACC honors: he received his first ACC player of the week award one week prior to being named to the John Olerud Watchlist.

Okay, so Messick is making his name as one of the better left-handed pitchers in college baseball, but he is on the John Olerud Watchlist, so we’ll throw him in the two-way mix. On the season, Messick has had just 40 at-bats and is hitting a mere .225.

But we’re here to talk about his pitching. D1Baseball named him one of the nation’s top freshmen pitchers after an impressive 2020 debut allowing just one earned run in his 11.2 innings before play stopped. This season, Messick sits at 6-2 with a 2.78 ERA and 109 strikeouts in 74.1 innings pitched. Those 109 Ks are sixth in college baseball and his 13.2 strikeouts-per-nine are a top-20 mark as well.

The biggest takeaway from Messick is his work ethic and desire to be better. He already had a low-90s fastball that also moved to go along with a changeup that could fall off the page. But reports are he added a curveball this season and he has certainly filled the starting pitcher profile in his move from bullpen to weekend rotation.

The best of the rest

These last few players don’t exactly fit into a category, but they certainly fill the bill of impact freshmen.

D1Baseball’s Kendall Rodgers recently chose Crews as his freshmen of the year candidate in an interview with our own Michella Chester. That should tell you what you need to know.

But we’ll tell you some more. We like Crews because he fits the bill as a true “five-tool player:” hitting, power, run, fielding and throwing. He leads the Tigers with a 1.066 OPS, showing off that .615 slugging percentage, and with 12 home runs, we can check off the power. He is also hitting .355 and is a friend of the gaps, and when you throw in a 33-to-36 strikeout-to-walk rate, we can check off the hit tool. Eleven stolen bases in 13 attempts? Run tool — check. He’s also made just two errors in 100 chances with four assists… check mate.

Crews could have easily been selected in the abbreviated, five-round 2020 MLB Draft but chose LSU instead. Thus far, it looks like the right choice as one of the SEC’s best hitters.

You sure do hear a lot about Jung from us. Last week, we named him one of the scariest hitters in college baseball. This week, we’re reminding you that he’s accomplished that as a freshman. To put it in perspective, since publishing an article coining Jung as one of the top power hitters in baseball, he’s added two more home runs, one double and five more RBI to his stat line… in three games.

Collectively, Jung is hitting .367 with a 1.244 OPS to go along with 18 home runs and 62 RBI so far. He leads the Big XII in home runs, RBIs and with an impressive .753 slugging percentage, which is ninth in DI. If Jung can stick at second base at the next level, you’re looking at a special player that brings a lot of power to a position not typically known for it. But for now, Texas Tech hopes he can lead the Red Raiders on another run into June.

Last year as a true freshman Taylor looked special. He made two starts in five appearances and posted a 2.16 ERA, but only struck out 10 in his 16.1 innings. What a difference a year makes.

Taylor has been dominant for the Chippewas in 2021. The righty sits at 9-3 with a 1.45 ERA and 101 strikeouts in 74.1 innings while walking just 19. He leads the MAC in both wins and ERA while placing second in Ks so far. For his efforts, Taylor became the first-ever player in Central Michigan history to be named to the Golden Spikes midseason watchlist.

Standing at 6’5, Taylor has typically been a pitch-to-contact hurler, but both his command and stuff have clearly seen an uptick. He’ll have a chance to have even more eyes on him this summer when he heads to the Cape to play for the Bourne Braves.