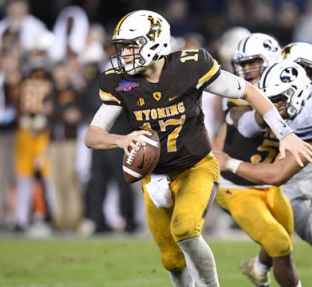 Josh Allen, Wyoming football will be true test for Iowa defense in Week 1

Iowa’s defense has a lot of respect for Allen, but in Saturday’s season opener at Kinnick Stadium, it’s about much more than a quarterback.

“We know this is a good offense,” Iowa linebacker Josey Jewell said. “(Allen) is a great quarterback, but he can do a lot of different things. And he’s got great people around him.”

Allen threw for 3,203 yards and 28 touchdowns last season as the Cowboys, under coach Craig Bohl, averaged 35.9 points per game.

“They’re much more than (Allen),” Iowa coach Kirk Ferentz said. “They’ve got a really well-balanced football team. Again, they’re well-coached. They threaten you a lot of different ways. A lot of guys back on the defensive side. They’re an aggressive group there.”

Wyoming brings back six starters on offense from a team that went 8-6 last season. Four of those starters are on the line, a veteran group that can protect Allen.

“We just have to find a way to contain him,” defensive tackle Nathan Bazata said. “We have to put some pressure on him.”

The scene is set | 24 hours to kickoff in @kinnickstadium https://t.co/QXAqxgTgOf

“I think the first thing that comes to mind, you just can’t take a play off,” Ferentz said. “I mean, there’s no days off, no off days in this whole thing.

“He can throw the ball down the middle, he can throw it outside really well, he can pull it down and run. I don’t know if they necessarily want to do a lot of running with him, but he’ll run the ball. If you’re not on top of your game with the rush, keeping your contain and those types of things, you’re going to get hurt, and then if you’re not covering guys tightly, you’re going to get hurt there, too. He’s got a great arm.”

Allen will test a secondary that will be without cornerback Manny Rugamba (suspension) and safety Brandon Snyder (knee injury from the spring).

“The other part of the equation I think with Wyoming is that they’re a very diverse, balanced team,” Ferentz said. “They ran for over 200 a game, threw for over 200 a game, so it’s not like they’re just a one-dimensional football team, which puts a lot of pressure on you defensively.”

Some other storylines with today’s game:

NOT BAD ON DEFENSE: Wyoming has eight starters back on a defense that ranked third in NCAA Division I play last season with five defensive touchdowns.

But opponents averaged 453.1 yards per game.

Can’t wait to get back into @kinnickstadium and hang with 70,000+ of our favorite people | #FightForIowaFridays pic.twitter.com/qNdHIP2etG

“My guess is that the emphasis has probably been on eliminating the big play,” Ferentz said. “They got victimized by that a little bit last year, and it’s hard to be a good defensive team, the kind of defensive team anybody wants to be when you’re giving up big plays, so I imagine that’s probably where the focus is.”

APP. STATE VS. MICHIGAN: 10-year anniversary of one of college football’s greatest upsets

TESTING STANLEY: That defense will be the first true test for Iowa quarterback Nate Stanley, making his first start after playing in seven games last season as a backup to C.J. Beathard.

Opponents threw for 249.5 yards per game against the Cowboys last season.

NEW FACES: Iowa has seven true freshmen on the depth chart, which means some of them may get a chance today.

“Right now we go in with an open mind,” Ferentz said. “Those guys have done well in camp. They look as if they can go out and perform. That being said, any new player, whether it’s a first-year guy or a fourth-year guy that hasn’t played, you’re going to have some ups and downs. That’s just the way it goes. So we have to keep that in mind, bear that in mind, but we’ve got an open mind for everybody right now.”

NEW FACES, PART II: Wide receiver Matt Quarells, a graduate transfer from New Mexico, hasn’t been with the Hawkeyes very long, but considering the inexperience in the position group, he may play sooner rather than later.

“Matt is kind of late to the game right now, so he’s really learning on the fly,” Ferentz said. “Before he was accepted into school, he really couldn’t do anything. He could come out and watch practice, but he couldn’t sit in a meeting, learn the technology, get a playbook, all those kinds of things, so he’s definitely in catch-up mode right now, but he’s learning quickly and doing some good things. He’s been impressive out there.”

NEW FACES, PART III: Of course, don’t forget about running back James Butler, the running back from Nevada who has joined the Hawkeyes as a graduate transfer after back-to-back 1,000-yard seasons.

This article is written by John Bohnenkamp from The Hawk Eye, Burlington, Iowa and was legally licensed via the Tribune Content Agency through the NewsCred publisher network. Please direct all licensing questions to legal@newscred.com.