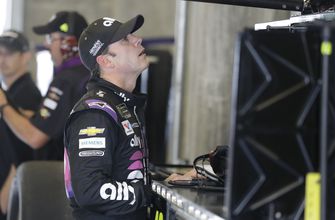 Johnson starts playoff push from No. 5 spot at Brickyard

INDIANAPOLIS (AP) — Jimmie Johnson will begin his last-gasp playoff push from the No. 5 starting spot after qualifying for the Brickyard 400 at 185.181 mph.

The seven-time Cup champion is the only driver to make the playoffs every year since the format was adopted in 2004. But he enters the race eight points out of the 16th and final spot.

He’ll be chasing pole winner Kevin Harvick, 2011 Brickyard winner Paul Menard and Clint Bowyer, who also is trying to lock up a playoff spot, after they took the top three starting positions.

Harvick, the 2003 Brickyard champ, went 185.766 in the No. 4 Ford for Stewart-Haas Racing. A late wiggle on his qualifying run dropped Menard to second at 185.724 in the No. 21 Ford for Wood Brothers Racing. It’s the third time Harvick has won the pole at Indy and his fifth pole of the season.

Bowyer took advantage of cloud cover to post fast times. Harvick’s teammate, Bowyer will start third in the No. 14 Ford with a speed of 185.277.

Johnson told reporters Saturday he needed to be fast out of the gate and needs to run up front all day to have a chance to drive the No. 48 Chevrolet for Hendrick Motorsports into Indy’s victory lane for a record-tying fifth time.

The other two playoff contenders — Danny Suarez and Ryan Newman — start further back. Suarez is 20th after going 183.643 in the No. 41 Ford and is trying to become the first Mexican-born driver to make the playoff.

Two of the 16 playoff spots are still open.