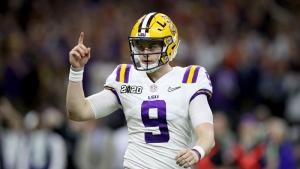 Joe Burrow at LSU: 12 great moments from his Tigers career


Joe Burrow went from Ohio State transfer to a Heisman winner at LSU in two seasons, a remarkable finish to a career that ended with an FCS-record 60 touchdown passes in the 2019 season and a College Football Playoff national championship.

Here are 12 of Burrow’s top moments with the Tigers.

In his first start with LSU after transferring from Ohio State, Burrow led the Tigers to a 24-point halftime lead before the big win against preseason top-10 Miami. Burrow was 11-for-24 for 140 yards in the win.

The Tigers earned another top-10 win, this time thanks to a 42-yard Cole Tracy field goal on the final play of the game. LSU trailed 21-10 before rallying. In the fourth quarter, Burrow found Derrick Dillon for a 71-yard strike to take it to 21-19. Then, with LSU down two points on its 24 and only 5:28 remaining, Burrow led his team on a 14-play, 52-yard drive to set up the Tracy field goal. Burrow finished 15-for-34 for 249 yards and a touchdown.

LSU picked up a notable win against No. 2 Georgia in an impressive 20-point victory. Burrow completed half of his 30 passes but reached 200 passing yards and rushed for 66 yards and two scores. The Tigers went 4-for-4 on fourth-down conversions.

Burrow’s big game halted UCF’s 25-game win streak in a 40-32 win in the Fiesta Bowl. Shaking off a hit after an interception, Burrow regrouped to pass for 394 yards, four touchdowns and an interception. The victory gave LSU a 10-win season (10-3) and a top-10 final national ranking.

In a showdown with Texas star QB Sam Ehlinger, Burrow won the stats and the game in Austin. Burrow threw for 471 yards and four touchdowns — including 15-for-18 for 251 yards and two scores after halftime. After the game, Burrow met with Longhorns coach Tom Herman, who recruited Burrow at Ohio State when Herman was an assistant there.

UNBEATEN: Every undefeated national champion since 1936

Two 5-0 teams met in Baton Rouge, but Florida couldn’t keep pace with the Tigers. Burrow had as many touchdown passes as incompletions (three), going 21-for-24 for 293 yard and three touchdowns.

The losing streak to the Tide ended at eight, with LSU hanging on for a 46-41 win. Burrow went 31-for-39 for 393 yards and three touchdowns while also rushing for 64 yards as he won a battle with Alabama QB Tua Tagovailoa.

Yes, Burrow had two interceptions. Yes, Ole Miss rushed for 402 yards. But Burrow and LSU still won by 21 points on the road. This time, Burrow passed for a career-high 489 yards and five touchdowns and even completed 17 passes in a row to set a school record. He also broke the school record for pass yards in a season (Rohan Davey in 2001). Three of the touchdowns went to Ja’Marr Chase, who had eight catches for 227 yards and three touchdowns.

Joe Burrow’s final game before winning the Heisman couldn’t have gone much better — or have been more of a coronation ceremony. Completing 28 of 38 passes, Burrow had 349 passing yards with four touchdowns in a rout of the No. 4 Bulldogs. The highlight was when he spun and stepped away from pressure before throwing on the run and finding Justin Jefferson for a 71-yard play.

The game was seemingly over before it really got started. LSU led 49-14 at halftime and cruised to a big win. Playing for the first time since taking the Heisman, Burrow went 29-for-39 for 493 yards and seven touchdown passes while also rushing for another score. Justin Jefferson was his top target. The two connected 14 times for 227 yards and four touchdowns. Burrow’s seven TD passes tied the record for a bowl game — and they all came in the first half.

Even when chased toward the sideline, Burrow had answers.

Facing a 10-point deficit to the defending national champions, Burrow and LSU responded with a dominant run to pull away for the program’s first title since the 2007 season. The Tigers piled up 628 yards as Burrow ended his college career 31-of-49 for 463 yards and five touchdowns along with 58 rushing yards and a touchdown.

NATIONAL TITLE: How Burrow, LSU beat Clemson for the crown