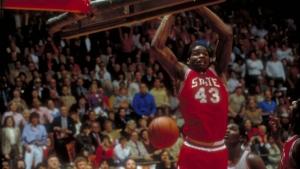 
In a shady section of Raleigh’s Oakwood Cemetery, the two men were laid to rest 18 years and maybe 20 yards apart.

A headstone marks one with the words Take time every day to laugh, to think to cry. There lies Jim Valvano, taken by cancer in 1993 at the age of 47. Not far away, Lorenzo Charles, killed in an accident in 2011, also at 47. Two men who, by chance, shared nearly the same burial site, but will also forever be connected by a dunk — and a moment that is part of the beating heart of NCAA tournament history.

The replay never grows old, no matter how many gazillion times it gets shown each March. Valvano racing around the court, searching for somebody — anybody — to hug, his face lit up by the remarkable national championship that had dropped from the Albuquerque sky and landed in North Carolina State’s lap. Lorenzo Charles had just turned an airball into a dunk at the buzzer, and the Wolfpack had stunned supposedly unstoppable Houston 54-52, to be become one of the Cinderella stories in perpetuity for March. A team that, Valvano would one day say, “taught us about dreams.”

Survive and advance. Every tournament team understands the mission, but it was North Carolina State that gave the term a face and a fairy tale in 1983. First, the ACC tournament, when the 10-loss Wolfpack escaped the tournament bubble with three wins by a combined 11 points. That included an overtime victory against North Carolina, the cause no doubt helped by the fouling out in regulation of a certain Tar Heel named Michael Jordan.

Then came the March of miracles in the NCAA tournament.

There was the 69-67 win over Pepperdine in two overtimes in the first round, the Wolfpack coming from six points back in the last 30 seconds of the first OT. The rally was made possible because Dane Suttle, who today still owns the fourth best free throw shooting percentage in Pepperdine history, twice missed the front end of bonus situations.

Next came the 71-70 win over UNLV in the second round, when the Rebels blew a 12-point lead by missing several free throws, and Thurl Bailey saved North Carolina State with a tip-in in the final seconds.

Later, the 63-62 Elite Eight victory over Ralph Sampson and Virginia, when the Cavaliers outshot the Wolfpack 63.4-47.3 percent and still lost, plagued, too, by a crucial miss from the line.

MARCH MADNESS: 11 details you might not know about Texas Western’s ’66 win vs. Kentucky

The 67-60 win over Georgia in the Final Four was relatively a stroll in the park in Albuquerque. But that left Houston, a dunking and dynamic machine that had acquired its own nickname. Phi Slama Jama. But Valvano kept using the word destiny about his team, and when the Cougars blew a late seven-point by — of course — missing free throws, North Carolina State was tied, with the ball at the end. The Wolfpack needed only one last lightning bolt to finish the job. And that’s when Dereck Whittenburg put up a 30-foot prayer as time was about to run out. It was so off-line and looked so harmless — but suddenly Charles was there to grab the wayward airball and slam it home. Somewhere in the vicinity was Houston’s towering Akeem Olajuwon, and an enduring mystery from that moment is why Olajuwon is nowhere to be seen, as Charles stuck a stake through his team’s heart.

No team with 10 defeats had ever won the national championship. It was a vivid, unforgettable example of a team believing in the magic its coach was trying so hard to sell, and using that belief to escape one crisis after another. And also, it showed how good fortune can turn into a weapon of mass destruction in March.

“One bounce here or there, and we’re gone,” Whittenburg said. And consider this: Four of the Wolfpack NCAA Tournament victories were by a combined six points. In those four games, the opponents missed 40 free throws. Pepperdine, UNLV, Virginia and Houston were a combined 53-for-93 from the line. “I wish,” North Carolina’s Dean Smith was quoted as saying somewhere along there, “that I had Jim Valvano’s defense against the free throw.”

To stand in Oakwood Cemetery is remember the night they electrified the sport — the man buried over here, and the man buried over there. Both were gone too soon. Charles, the epitome of what glory and fame can come from being in the perfectly right place at the perfectly right time. And Valvano, the man who ran around a court and gave college basketball the gift of an immortal image of joy.