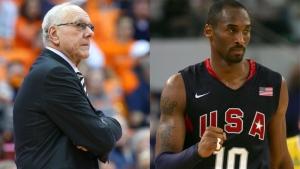 “Kobe impressed me more than any other player I’ve ever worked with,” Boeheim told Andy Katz on the latest episode of the March Madness 365 podcast. Bryant and his 13-year-old daughter Gianna were among nine people killed in a helicopter crash Sunday in Calabasas, Calif. Boeheim’s interview  with Katz begins at about the 36-minute mark of the podcast.

Bryant was the captain of the 2008 Team USA squad known as the “Redeem Team.” The group of players was set on winning gold after USA fell to Argentina in the 2004 semifinals.

Kobe Bryant was not only one of the greatest basketball players ever, he was also the hardest working player I’ve ever been around. I was so fortunate to have known him and coached him with Team USA. Our thoughts and our prayers are with his wife, Vanessa, and the Bryant family.

Team USA’s toughest opponent in 2008 was Spain in the gold medal game. Kobe’s runner in the lane with about a minute left put Team USA ahead eight. He scored 20 points in the final as the Americans won 118-107. He was back in 2012 to help the United States capture another gold medal in London.

“He was a tireless worker in the summertime preparing for a game like it was the most important thing in the world, which it was to him,” Boeheim told Katz. “[His] remarkable will to win. (Michael) Jordan and Kobe I think are the two that I’ve seen in my lifetime that have that tremendous will to win.”

Boeheim and Katz also talked about the Orange’s five-game winning streak, including wins over Virginia and Virginia Tech on the road. Boeheim and company are 13-7 with a 6-3 in-conference record and are fourth in the ACC standings.

WHERE’S CUSE?: Where in the Power 36 are the Orange?

“We have to play at a high level. Clemson has beat Duke and North Carolina this year, a very good team, very good at home and a tremendous challenge for us. Duke obviously, is one of the best teams in the country. So it’s a big week and we’re looking forward to it,” Boeheim said.