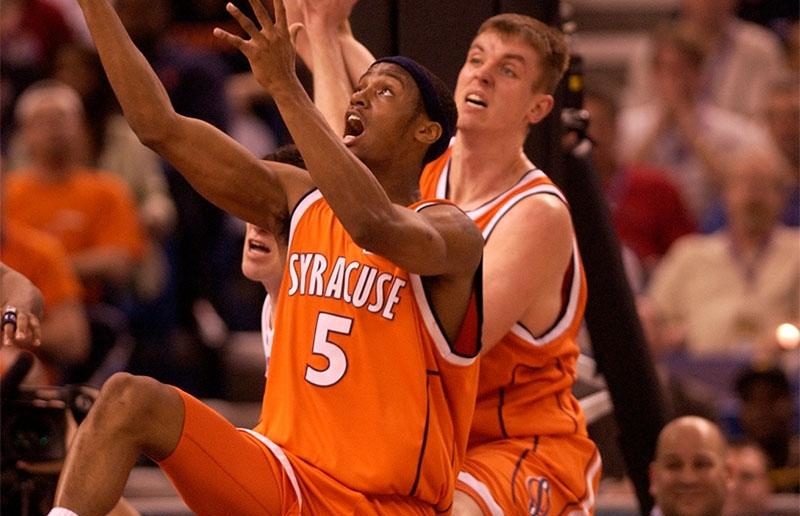 
During Jim Boeheim’s 44-year stint as the head coach at Syracuse he has racked up 964 wins, one national championship, five Final Four appearances and has coached the likes of Carmelo Anthony, Tyler Ennis, Derrick Coleman and Dion Waiters.

On the latest edition of the March Madness 365 podcast Boeheim talked to Andy Katz about his illustrious career, his relationship with Michael Jordan and what his team is doing in this year’s unique off-season.

Boeheim also breaks down ten of his best players into ten different categories to build the ultimate Syracuse player.

Here are the ten players that make up Boeheim’s list:

When trying to think of a quarterback or player known for his court vision and passing skills, Boeheim gave the nod to the 1980s star Pearl Washington. Boeheim credits Washington for helping put Syracuse and the Big East conference on the map nationally.

“Pearl coming in changed the history of the Big East, along with Patrick [Ewing] and Chris Mullin,” Boeheim said. “Catapulted the league into the top league in the country within a year or two of its formation, which was something that no one thought that was possible to do.”

Washington averaged 15.7 points, 6.7 assists and 2.3 steals per game during his time playing in the Carrier Dome. He lead the team in assists and steals in each of his three years. He is currently third all-time in assists at Syracuse and a three-time All-American. Washington died in 2016 at the age of 52 due to brain cancer.

Syracuse shocked the college basketball world in 2006 by running through the Big East tournament as the No. 9 seed and taking home the conference championship. Without Gerry McNamara this wouldn’t have been possible.

That 2006 Syracuse team went 7-9 in conference play before McNamara exploded for 16.25 points per game and an average of four 3-pointers per game in the conference tournament. He also knocked down a game-winning shot against Cincinnati and game-tying bucket versus No. 1 seed UConn.

“We didn’t count up the number of game-winners but he probably made seven or eight,” Boeheim said of McNamara’s career as a Syracuse player.

Tony Bruin, also known as “Red” Bruin was the first to come to mind because of his impressive vertical leap.

“He could jump over the building, really,” Boeheim said. “Tony was a really really athletic-type player and good player.”

That improvement was thanks to Shumpert’s impressive outside shooting, where he shot 38 percent from beyond the arc landing him a spot on the All-Big East team his junior and senior season.

Although Carmelo Anthony only played one year at Syracuse he is one of the most recognizable names to ever play for the Orange. Anthony helped lead Syracuse to the 2003 National Championship game where Jim Boeheim was able to take home his first and only NCAA national championship. Anthony was named the Most Outstanding Player in that tournament.

Anthony averaged 22.2 points and 10 rebounds per game during his one year at Syracuse, leading the team in both categories.

“We’ve had a lot of guys that could get buckets, but he could make the three, pull-up or get to the basket, and offensive rebound,” Boeheim said.

Etan Thomas ended his four-year career averaging 3.5 blocks per game. Although Boeheim is known for running a 2-3 zone emphasizing a team defense, Thomas was known throughout the Big East as an established rim-protector.

Thomas led the Big East in blocks his sophomore-senior seasons and is still No. 3 in the conference in total blocks recorded all-time. Boeheim also named Eddie Moss as a great defender. Moss played for Boeheim from 1977-1981.

Derrick Coleman was not afraid of getting dirty and scooping up loose balls. Considered one of the all-time greatest rebounders in college basketball, he still leads the Big East in total rebounds with 1,537 for his career.

PAYTON’S PLACE: These are Payton Pritchard’s 5 favorite games from his senior season

“The best rebounder was Derrick Coleman,” Boeheim told Katz. “Great hands. If he could get his hands on the ball he brought it in.”

The 6’10” forward is third on the NCAA all-time rebounding list only topped by Tim Duncan and Kenneth Faried.

Josh Pace is the third player Boeheim has named that was on Syracuse’s 2003 National Championship team. Noted as the sixth/seventh man on that championship squad, Pace was the guy who came off the bench and could do it all.

“He could rebound a little bit, he could score, he defended, he made steals, good passer,” Boeheim said of Pace. “He’s a guy that kept the team together.”

Boeheim also names Stephen Thompson as a glue guy. Thompson played along with Derrick Coleman from 1986-1990.

Tyler Ennis tops Boeheim’s list when it comes to basketball IQ and being the coach on the floor. In 34 games, he averaged 12.9 points, 3.4 rebounds, 5.5 assists and 2.1 steals per game.

“I think Tyler Ennis might have been one of the smartest point guards,” Boeheim said. “He made the right plays all the time. He sticks out as just a smart basketball player who knew exactly how to get the ball to people and make plays.”

Sherman Douglas picked up right were Pearl Washington left off with Syracuse basketball in the 1980s. As a three-time All-Big East point guard, Douglas averaged 14.9 points and seven assists per game during his four years.

“Sherman being able to take over for Pearl and do almost the exact same stats — lead the league in assists, scoring, steals,” Boeheim said. “Two unique players and two of the all-time great point guards I think in college basketball.”