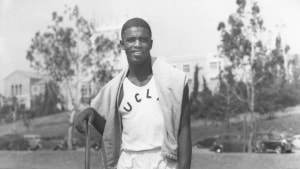 Jackie Robinson at 100: Before the Dodgers, a 4-sport star at UCLA

Thursday marks the 100th birthday of Jackie Robinson, a civil rights leader and the man who broke the color barrier in Major League Baseball when he trotted out to first base for the Brooklyn Dodgers on April 15, 1947.