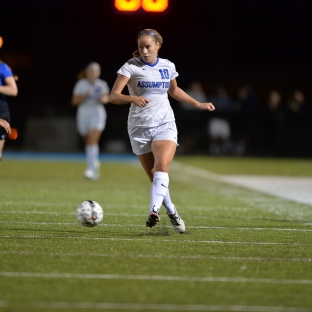 Kallie Villemarie has plenty of friends. Division II goalies probably aren’t many of them right now.

Assumption’s junior forward and midfielder is the top goal-scorer in DII women’s soccer. Villemarie has 12 goals through six games. She scored 14 total goals during her first two seasons, so her two-goal per game average is an example of her breakout year. She credits it to a new feeling on Assumption’s pitch.

“This season there is a much more positive and fun environment to play in,” Villemarie said. “I know myself and many of my teammates do not feel the pressure we have felt in previous years and that makes it a lot easier to play our best. I also had both of my shins operated on after last season. The operations were very successful and took care a lot of the problems I had been experiencing the past two seasons.”

Villemarie is on a tear, and so are the Greyhounds. After a disappointing 2016 that saw an 8-9-1 finish, Assumption is off to a 5-1 start. First-year head coach Grace Barnard — the first women’s head coach in the program’s history — has not only changed it to a winning attitude, but has revamped the culture.

“Like I said, we have a positive and fun environment to play in this season,” Villemarie said. “That is something we didn’t have last season and it really took away from our passion and love for the game. This season we show up excited to be at every practice and every game wanting to get better and better, and I think that is very important to a team’s success. We also play very well together as a team. We want to work and play for each other whenever we are out there which is also very important to having a successful season.”

Although young, Assumption’s defense is experienced. Goalkeeper Alexis Nason is merely a sophomore. There isn’t a senior on the strating back line, Sammy Ferrera and Emily MacDonald are both sophmores and Kiana Rocco is a junior. That has given the offense a slightly more aggressive approach, to help the defense out as much as they can.

“Both goalkeepers are very good,” Villemarie said. “They are constantly making great saves in practice. Most of our back line played almost every game last season, so they are experienced. As for the offense, you always want to go up by as much as you can. That way there is less pressure on the back line, goalie and entire team in general in case something does go wrong. So we always feel the pressure to score more goals.”

Along with being tops in goals scored, Villemarie’s 25 points is tops in the NE-10, good for second in DII. She is hoping that neither hers, nor the Greyhounds’, success slows down as they prepare for the second half of the season. But what makes Villemarie DII’s best scorer?

Favorite sports movie: Definitely Miracle. This is my absolute favorite because I grew up about 45 minutes from Lake Placid. It is very inspirational and makes you feel like you can accomplish anything if you put enough heart and work into it.

Favorite soccer player: Abby Wambach. I really like her because she was amazing and so much fun to watch play.

What’s in your headphones: Before a game I will listen to anything that is being played on the speakers I don’t really have a favorite song to listen to before games.

MORE: Inspired by the USWNT, UCM’s Ana Dilkes is on another shutout run in DII soccer

Favorite cartoon: Growing up, it was Scooby-Doo. I don’t really know why I liked it so much my dad and I would just always watch it together.

If they made a movie about the team, who would play you? I would want Blake Lively to play me just because she is awesome.

Favorite TV show: Greys Anatomy. I just find it really intense and entertaining, there is always something new happening.