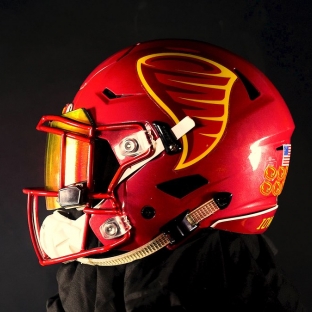 When Iowa State hosts Texas Thursday night on national television, the Cyclones will have a new, stylish look to their football team.

Iowa State revealed its new secondary decal that features a cyclone helmet sticker instead of the usual “I-State” look on both the red and white helmets.

The Cyclones were greeted to their new looks prior to Thursday’s game against the Longhorns and their reaction can be seen here:

“Iowa State’s sports teams have been known as the Cyclones since 1895 when Coach Pop Warner’s team upset Northwestern 36-0 and a Chicago Tribune headline the next day reported “Struck by a Cyclone: It comes from Iowa and Devastates Evanston Town.”

“Iowa State has used various forms of Cyclone marks occasionally in its history. But, officially adding a Cyclone symbol that depicts the school’s long-time nickname this season is a significant brand enhancement.”