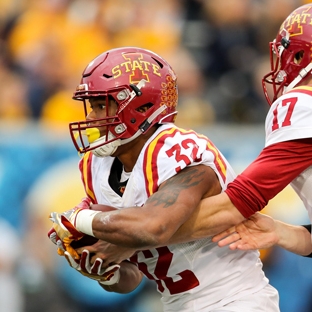 AMES, Iowa — Iowa State is looking at a challenge it hasn’t faced often this season.

For the first time in more than a month, the Cyclones are trying to bounce back from a loss.

A 20-16 loss at West Virginia on Saturday ended a four-game winning streak that had triggered a national buzz about the Cyclones and catapulted them into the No. 14 spot in the Top 25. They’re still at No. 24 in the rankings as they prepare for a visit from No. 12 Oklahoma State, which has one of the nation’s most productive quarterbacks (Mason Rudolph) and offenses (579.4 yards a game).

Coach Matt Campbell believes his team is up to the task.

“These kids keep grinding away and I really appreciate that about them,” Campbell said Monday. “They were really good yesterday and I think (they’re) continuing to grow and understand what it takes to be truly successful.”

Fall In Love With The Process!

Do the Unremarkable With Remarkable Detail! #RaiseTheStandard

One thing it will take is more consistency on offense. Iowa State (6-3, 4-2 Big 12) has averaged only 15 points in its last two games and that doesn’t cut it in any league, let along one as offensively proficient as the Big 12. Only two Big 12 games this season have been won with fewer than 15 points: Iowa State’s 14-7 victory over TCU and Oklahoma State’s 13-10 overtime win at Texas, a score that seems unfathomable after the Cowboys’ 62-52 loss to Oklahoma over the weekend.

MORE: College football teams that (we think) control their own destiny for the College Football Playoff

The Cyclones had their chances at West Virginia but too often had to settle for field goals instead of touchdowns. Twice in the third quarter Iowa State had the ball at the near the goal line and came away with just one touchdown.

“It was all detail,” Campbell said. “We had six plays inside the 9-yard line and two of them were awesome.”

One was a run during which David Montgomery broke several tackles and left the Cyclones second-and-goal at the 1. The other was a 1-yard touchdown pass from Kyle Kempt to Allen Lazard.

“The other four were just a lack of execution,” Campbell said. “They’re home runs, they’re touchdowns, they’re walk-ins one way or another, if you just execute. Number one it falls on us because we’re the teacher and we need to teach better. Number we’ve got to execute better.”

ISU is the only team in the nation without a lost fumble this season. ISU has ran 631 offensive plays without losing a fumble from 2016-17. pic.twitter.com/8EtfZoC4pB

Iowa State did put together two drives of 10 plays and another of 13 plays. But instead of 21 points, they produced only 13. Even with its defense holding West Virginia scoreless in the second half, what wasn’t enough.

“We’ll learn,” Campbell said. “The great thing is we’ve got kids that take responsibility, and we take responsibility. There’s no blame game. You grow from it and get better from it. That would be the biggest thing to take away.”

Even with the loss, Iowa State still has a chance to play in the Big 12 championship game if it can win out. Oklahoma and TCU share first place at 5-1 and they play each other on Saturday night. Iowa State has victories over both.

Oklahoma State and West Virginia join Iowa State at 4-2 in the league. After Saturday, Iowa State finishes with road games against Baylor and Kansas State.

“It’s where you want to be in college football. You want to be in it in November,” Campbell said. “We’re there right now and it’s great. It doesn’t mean we’ve arrived. There’s still a lot of work to do. The kids know that and we know that.”