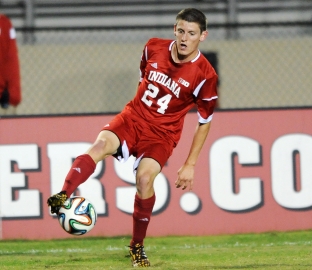 For the first time since 2012, the Indiana men’s soccer team will open a season without Tanner Thompson on the team when the Hoosiers take the field at 5 o’clock on Friday night against Cal Poly at the Mike Berticelli Memorial in South Bend.

For just the second time in nearly 13 years, Trevor Swartz will take the field without Thompson on his side.

RELATED: 10 must-see games to kick off the soccer season

It’s a challenge both team and player are ready to face.

“I actually grew up with Tanner since I was 9 years old,” said Swartz, a Cameron Park, Calif., native, “so there’s really no pressure (to replace him).”

Trevor Swartz converts the penalty kick for the Hoosiers in the 87th minute!

“Tanner’s been our go-to player and kind of our attacking quarterback (for years),” Yeagley said. “The nice thing about Trevor is he’s always been tactically one of our better players, and he’s been a great understudy for Tanner and he’s played a lot of roles and because of that, he has a good feel for a lot of our attacking movements.

“He’s a different type of player than Tanner, but effective in different ways.”

Swartz, meanwhile, continues to take advice from his childhood friend, who has appeared in 13 games, starting seven, just up the road with the Indy Eleven.

“(Tanner)’s been really supportive when I’ve talked to him about it,” Swartz said. “He’s been helping me watch game film and stuff like that, so it’s definitely been a good transition coming from playing the ‘8’ last year to the ’10’ role. It’s definitely been smooth, but I’ve got a good grasp for it, and I feel confident going into the weekend.”

“It’s kind of weird (without Tanner), but I’m happy to see him playing professionally. It’s been his dream since he was little, so it’s awesome. We definitely miss him around here, but we’re figuring it out without him.”

The ‘8’ role Swartz played much of last season forced him to play box to box on offense and defense, but he still finished second on the team with five goals and tied for the team lead in assists (three) with Thompson.

Now Swartz is moving to that ’10’ role as an attacking midfielder under the striker, which should only increase those scoring chances.

“He is one of our most technical finishers,” Yeagley said. “If he’s 25 (yards) from goal, we all get excited. He does that in training, he’s proven that in matches in the times he’s been closer to goal. … As the ’10,’ I think he’ll get closer to goal and that allows more opportunity for finishing.”

The one thing Swartz didn’t have an opportunity to finish a year ago was his season. Injured in the Big Ten Tournament semifinals against Wisconsin, a bloodied Swartz was forced to sit out the rest of the postseason with a head and facial laceration that required stitches. That also meant missing the chance to play against his older brother, Connor’s, former team — Virginia Tech — in the third round of the NCAA Tournament. It was a game IU lost in overtime, 2-1.

“There was definitely a lot going on in our household before that game,” Swartz said. “Yeah, you come to IU wanting to play in the postseason, November and December, so it was definitely tough to not do that. I’m excited we’ll get there again this year, and I’ll get my chance to make a difference.”

By the time the spring season rolled around though, Swartz was back to full speed.

“That was definitely a weird experience coming back from a tough injury,” he said. “It was hard, but once it came around March, I felt back to myself. Working out with (strength coach) Tom Morris this summer, and Jeremiah Gutjahr and I took I-Core all summer together and worked out all summer, and I feel the best I’ve ever felt, so I’m excited (for the season).”

Swartz has seen just about every side of being an IU soccer player as he enters his fourth year, serving as a role player as a freshman, redshirting as a sophomore and finally starting as a junior. And although he’s not an official captain — duties officially assigned to Grant Lillard, Jack Griffith and Frankie Moore — Swartz is still taking the lead for the Hoosiers.

“Trevor’s not a named captain, but he’s definitely one of the leaders of the team, and he knows that,” Yeagley said. “The way he plays, his composure, he has a great approach. He does not get rattled, he stays even keel. But he competes and that I love about him, he’ll leave everything out on the field, and that’s a great example too. He’s going to be a leader of this team.”

That’s just another way Swartz is picking up where Thompson left off.

“He’s a different player than Tanner,” Yeagley said, “but effective in different ways.”

This article is from Herald-Times, Bloomington, Ind. and was legally licensed via the Tribune Content Agency through the NewsCred publisher network. Please direct all licensing questions to legal@newscred.com.