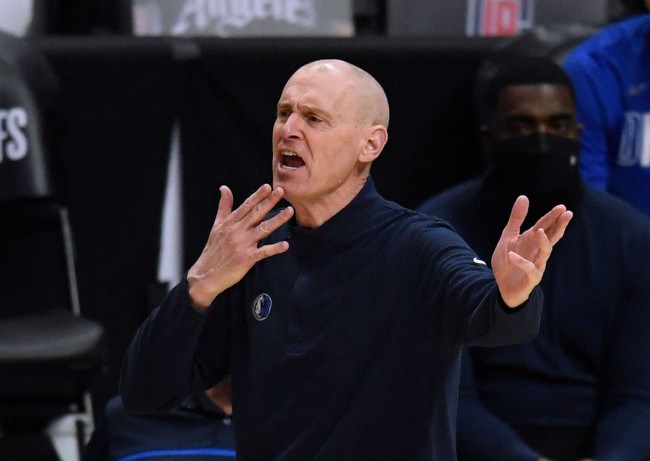 LOS ANGELES, CALIFORNIA – MAY 22: Head coach Rick Carlisle calls for a foul in the third quarter against the LA Clippers during game one of the Western Conference first round series at Staples Center on May 22, 2021 in Los Angeles, California. (Photo : Harry How/Getty Images)

Just a week after his shock exit from the Dallas Mavericks, Rick Carlisle dove right back in to the NBA universe, taking the head coaching position with the Indiana Pacers, the team that launched his career 18 years ago.

The Pacers made the announcement on Thursday with Carlisle signing a four-year deal worth $29 million plus incentives. Kevin Pritchard hopes this coaching move will stick much longer after his two previous hires went bust.

Nate McMillan, who’s making waves with the Hawks in this year’s playoffs, was fired last August following his fourth consecutive first-round playoff exit and just weeks after signing a contract extension. They then hired Raptors assistant Nate Bjorkgren as their next head coach, but he lasted just one season with the franchise after a tumultuous season with the Pacers.

Reports surfaced during the season about Bjorkgren’s inability to establish good relationships with the Indiana players. It sure didn’t help matters that the Pacers were plagued with injuries the entire season. T.J. Warren underwent surgery to repair a stress fracture in his left foot just four games into the season and didn’t return.

Myles Turner also missed 22 of the Pacers’ last 23 games in the regular season and both play-in matches after suffering a partial tear in his plantar plate in his toe. Malcolm Brogdon and Domantas Sabonis also missed several games this season as the Pacers struggled to find chemistry in Bjorkgren’s first and only year at the helm.

In Rick Carlisle, though, the Pacers have gotten themselves a coach who’s already a proven commodity in the league. He is 836-689 overall in his career with the Indiana Pacers, Detroit Pistons and Dallas Mavericks.

Carlisle made a name for himself with the Mavs, going 555-478 with the Dallas franchise and leading them to their only NBA title in the 2010-11 season with superstar Dirk Nowitzki. The Mavs were constant playoff contenders under Carlisle but failed to make a deep run after that championship season as they didn’t win another series in the playoffs.

That being said, Carlisle’s sudden departure from the Mavs was a complete surprise. There were reports that tension was building between Carlisle and Mavs superstar Luka Doncic. Owner Mark Cuban still expected Carlisle to return as Dallas head coach, though, but general manager Donnie Nelson’s exit hastened Carlisle’s decision to call it quits.

The Pacers pounced on Carlisle’s sudden availability, rekindling their partnership in the 2000s. He spent three seasons as Larry Bird’s assistant coach before taking the head coaching job with the Detroit Pistons in 2001. He quickly showed his talent with that franchise, becoming the 2001-02 NBA coach of the year.

The Pacers brought back Carlisle two years later, this time as their head coach. He went 181-147 in four seasons as Indiana’s head tactician and was named the East’s All-Star coach back in 2004. He brought Indiana to the Eastern Conference Finals in just his first season there as head coach.

The 61-year-old NBA veteran will look to replicate that success with this current crop of Pacers. Carlisle is tasked to improve Indiana’s defense that surrendered 115.3 points per game last season, sixth-worst in the league.