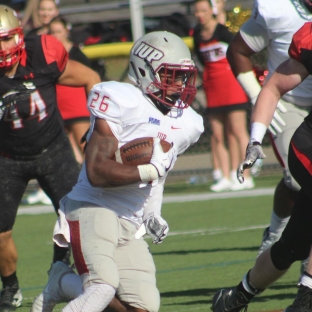 Six touchdowns. Plenty of running backs would be happy rushing for six touchdowns in a season.

The IUP Crimson Hawks’ Samir Bullock took care of that in one afternoon.

“Words couldn’t really explain it,” Bullock said. “It was a great feeling, a great team win. I give all the appreciation to my linemen. Those were the guys who got the job done. I was pretty surprised when I scored that sixth touchdown, even I was like ‘wow’. The guys came over to me and congratulated me. It was a good feeling, and an even better feeling getting the win.”

“It hasn’t sunk in yet to be honest,” Bullock said. “Looking at all the tweets and stuff, I’m still shocked. But on the other hand, there’s a lot of work to do. We have two outstanding opponents coming up, and I’m just moving on to the next step.”

The first of those two opponents is California (Pennsylvania). The game is a DII football heavyweight bout, pitting No. 4 IUP vs. the No. 16 Vulcans. It’s also a rematch of last year’s second round playoff matchup, one in which Cal U rose victorious 44-23, ending IUP’s season.

“We’re super excited,” Bullock said. “Cal U is an outstanding team. They crushed our hopes a little bit last year, beating us twice. We’re looking to get back at it, showing them that we’ve come back a better and more sound team this year.”

Despite the amazing feat — and nine total touchdowns on the season — Bullock doesn’t have to do all the work on his own. The Crimson Hawks are extremely balanced. Quarterback Lenny Williams, Jr. is one of the best in DII football, able to do the little things that keep plays alive.

“Oh it’s awesome,” Bullock said of playing with Williams. “He’s just an outstanding player, a dog, a very hard worker. For somebody to come back from an injury like he had so fast, and still produce and do what he’s doing is just awesome. I love playing with him, he’s one of the best quarterbacks I’ve ever played with.”

That throw … just a flick of the wrist pic.twitter.com/DjcD9QLuEB

A perfect 5-0 start. Up five spots from its preseason No. 9 ranking. The No. 6 total offense and No. 22 total defense in all of DII football. Things are looking good in Indiana, Pennsylvania.

“It’s good that they got us ranked in the top five, but we’re not getting ahead of ourselves,” Bullock said. “We’re halfway through the season, it can all be taken away from us at any given time. This is the meat of our schedule, we have to take it more seriously.”

Let’s go under the helmet with Bullock and find out more about the PSAC’s newest touchdown machine.

Favorite sports movie: Either The Longest Yard or Remember the Titans.

Favorite football team: I’m from Philadelphia, but I’m actually a Giants fan. I like the Eagles, I don’t hate the Eagles, just not when they’re playing the Giants.

Favorite football player: I grew up in the Brandon Jacobs, Tiki Barber and Ahmad Bradshaw era. I’ve been a Giants fan since.

Superstitions: I do a little pregame prayer just to get focused on the task at hand. I need to remind myself there’s one goal, and remind myself that after this game I’ll have to go home, look in the mirror and ask myself if I had a good game or not.

What’s in your headphones pregame? A combination of everything. A little bit of Meek Mill, you know he’s from Philly. Definitely Drake to keep me calm and collected.

Pregame meal/ snack: Mostly water and [fluids]. A couple days before the game is the most important days to rest up and get fluids so you can perform come game time.

Favorite TV Show: I watch Power, it comes on Starz. Very good show. I don’t really watch too much TV, but when I do, that’s it.

You did something that very few others have done. Any other special talents not many people can do? I taught myself how to do back flips. I used to breakdance when I was younger, so I could do dance moves, windmills and stuff like that.