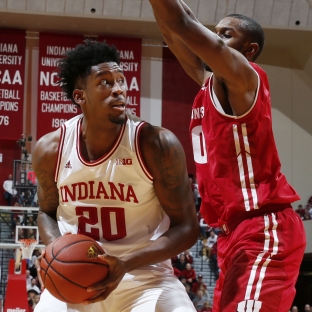 Now, the Indiana sophomore center is tasked with a new objective.

Miller needs his big man to develop better game conditioning with the start of the regular season looming Friday. With a rather thin front court, the Hoosiers need Davis to player longer stretches in a larger role, so it will be a challenge he’ll need to meet sooner rather than later.

“I told him the other day that I don’t think he can play 15 good minutes yet,” Miller said on Friday. “I tried to get his attention, because he thinks right now he’s obviously playing a lot better and obviously feeling a lot better, but the expectation is really high from our staff in what we’re gonna ask him to do. He’s working hard at it. I like his approach.”

For Davis, the best way to further his conditioning will be through playing more games. Luckily for him, the season’s first month will provide plenty of opportunities.

The Hoosiers play twice this weekend, including Friday’s season opener against Indiana State, followed by an 8 p.m. tipoff Sunday against Howard at Assembly Hall. After a trip to Newark, N.J., next Wednesday to face No. 23 Seton Hall in the Gavitt Tipoff Games, Indiana will return home for the final three games of the Hoosier Tip-off Classic.

That event includes a Nov. 19 date with South Florida, followed by a pair of games against Arkansas State (Nov. 22) and Eastern Michigan (Nov. 24) sandwiched around Thanksgiving.

“De’Ron has to play in games to get in game shape,” Miller said. “Thankfully, like I told those guys, we’ve got a ton of them coming.”

Indiana can accept 25 minutes from Davis early in the schedule, but it will need upwards of 30 minutes per contest as the season continues. Davis played 23 minutes in Sunday’s exhibition finale against the University of Indianapolis, becoming visibly fatigued at times. He finished with 11 points, seven rebounds and four blocks.

RELATED: 5 Big Ten games to look forward to this year

“He was exhausted in a couple of stretches,” Miller said. “I think that’s when the (UIndy) big fellow in the second half started just to get easy catches and got around him a couple times. But I also thought he played better throughout longer stretches (Sunday).”

This article is from Herald-Times, Bloomington, Ind. and was legally licensed via the Tribune Content Agency through the NewsCred publisher network. Please direct all licensing questions to legal@newscred.com.