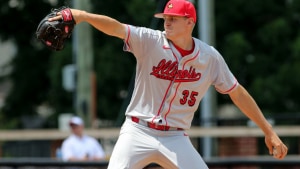 
LOUISVILLE, Ky. — Well, that didn’t take long, to find a diverse pack of upstarts with assorted back stories, eager to begin making life miserable for a favorite in the NCAA baseball tournament.

Meet Illinois State, the team that hadn’t been in the tournament in nine years.

The team that played 36 road games this season, but managed to win 19 of them.

The team that was swept in a three-game weekend at Illinois by a combined score of 30-6, but Friday knocked off another Big Ten pretty face in Indiana, 8-7.

The team whose bullpen hit a stretch Friday when the relievers threw 53 pitchers and only 23 of them were strikes, but somehow got away with it. “That’s not the way we drew it up,” coach Steve Holm would say later.

The team whose pitchers struck out 18 Hoosiers, while its batters knocked out 18 hits.

The team that might be a No. 3 seed, but you don’t want to be facing the Redbirds in a close game. They’re now 9-2 in one-run decisions, partly because they’ve pummeled the opposition 107-62 from the eighth inning on.

EVERYTHING YOU NEED TO KNOW: How the College World Series works

Who are these guys?

The starting pitcher — Brent Headrick — is a junior who had never struck out more than 12 batters in a game in his career, and entered Friday 133rd in the nation in Ks per nine innings. But he mowed down 14 Hoosiers in the 25 batters he faced in his six innings Friday, with a fastball that seldom topped 90, but movement that had Indiana guessing wrong all day. “My job,” he would say later, “was to just keep them off-balance as best I could.”

You could gauge Headrick’s effectiveness, with both Indiana’s bats and Indiana’s heads, by the open frustration of the Hoosiers.

After a wild seventh inning, an RBI double from Aeilts and some great pitching to close out the game from Harvey are the difference. pic.twitter.com/g4yB8erKm3

Such as Scotty Bradley. “A lot of it was us getting ourselves out, having bad at-bats, really having no approach, no mindset going in the box, really just kind of flailing at the ball. Obviously, it bit us in the butt at the end.”

Such as coach Jeff Mercer: “We acted like we panicked for about five innings. We tried to do way too much. We tried to take individual at-bats in a very team-oriented game. We tried to overwhelm the game individually and that’s just not how it works.”

Such as left fielder Elijah Dunham, who was the one Indiana player to hurt Headrick with a two-run homer, and said afterward a lot of Hoosiers were “hitting like a bunch of babies.”

The Illinois State second baseman who had five hits — Derek Parola — graduated summa cum laude from high school in Illinois, and buried 127 3-pointers as senior. Friday, he was the symbol of a relentless Redbird attack that can just peck a pitching staff to death. “When we get that pitch to hit, we want to make sure we hit it, and if we don’t, we want to keep battling and battling and battling,” he said, “so that momentum we always talk about stays on our side. It’s kind of been our whole style of play, just grind it out and keep moving.”

ISU wins a thriller and advances to face the winner of the Louisville/UIC game coming up! #RoadToOmaha pic.twitter.com/GbddDoNZEw

The reliever who shut down Indiana with 2.1 innings of scoreless, one-hit relief — Dalton Harvey — is the son of Todd Harvey, who played in the NHL for 12 seasons and is now a scout for the Vancouver Canucks. Dalton had pitched in only eight games this season and arrived at the ballpark Friday with a 6.00 earned run average. But there he was in a pressurized seventh inning, with the bases loaded, a 2-0 count, and a 7-2 lead cut to 7-6, mostly by all the walks. “It’s not ideal, I’ll tell you that much,” he said later of the situation. He hit a batter to tie the game 7-7, but then retired seven of the next eight hitters. “As soon you get locked in out there, all that pressure kind of goes away, and you’re just focused on what you need to do.”

So why isn’t he playing hockey, and what did his dad think when he chose a ball over a puck? “My dad was actually a baseball fan. I had a feeling I was going to be a better baseball player than a hockey player. I don’t think he was too angry about it.”

The rightfielder who doubled in the deciding run in the eighth — Joe Aeilts — was Missouri Valley Conference player of the year and has a father Rick who was drafted as tight end by the Cleveland Browns. All manners of sports represented on that Illinois State roster.

The first-year coach putting all this together, Holm, caught for awhile in the big leagues, and has lit a fire beneath Illinois State, understanding he has many different faces to mix.

During our first team meeting back in August I told these boys they would play in a NCAA regional at the end of the season. Some smiled, some rolled their eyes. They all hoped it was true. They no longer hope, they believe. They believe in themselves! ⁦@RedbirdBaseball⁩ pic.twitter.com/ExUequvYqs

“You totally know that when you come to a team and you take over and rebuild, you’re going to have a bunch of different stuff going on. You’re not going to be able to fix everything you want to fix, you just have to find a way to make it work. That’s kind of what we did. Today we left a closer with 11 saves in the bullpen there (Jacob Gilmore), and went with a Canadian hockey player who hadn’t pitched a whole lot. That’s been the story for our whole season.”

And now that story has led to the winner’s bracket of the Louisville Regional.